Guessing What Soulbound is About: Or, Is This Just Lanthanum Chromate?

There is an RPG for Age of Sigmar, called Soulbound, and it has a starter set. £22.99 seems like a lot to pay for something I will almost certainly never play (I shudder to imagine what the actual 'full' version costs). But it has previews. Let us peer into them, like witches around a scrying pool. 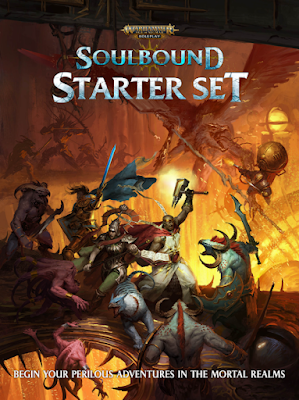 Curiously stagey-looking and inert, lacking in dynamism for all the harum-scarum depicted, this is fantasy art in its least appealing guise - a poor pastiche of the D&D 5th edition cover art (which is itself also curiously stagey-looking and inert, and lacking in dynamism for all the harum-scarum depicted). Thematically, though, it is interesting: crusaders entering hell to smite demons - a touch of "A Paladin in Hell", even? - I am still just about in touch enough with my 12 year old self to understand the appeal.
The Character Sheet 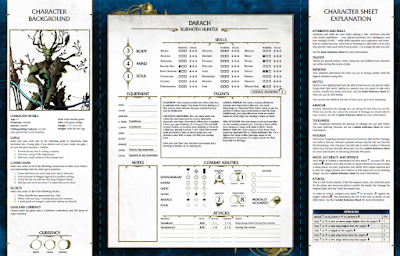 What this reminds me of, somewhat unexpectedly, is the oWoD character sheet, and it implies (to my eye, at least), something to do with dice pools. Perhaps the most salient point to note is that this is fairly bog standard stuff; Soulbound is not going to revolutionise RPGs as we know them. It's also, let's be honest, pretty uninspiring - choosing from a small set of circumscribed "goals", "connections" and "secrets" for one's PC is profoundly boring, but that ship just seems to have sailed at this point; it appears to be absolutely standard for RPG rulebooks to adopt that kind of approach. The OSR has affected the mainstream not a jot.
Introductory Adventure 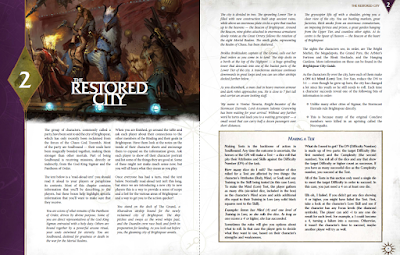 Much to lament here. Read-aloud text. Sharing of character portraits. Strict sequencing of events. Having the players repetitively roll dice to see if their characters know things. Have we fought and died in vain? Anyway...it's definitely dice pools.
One-Page Adventures 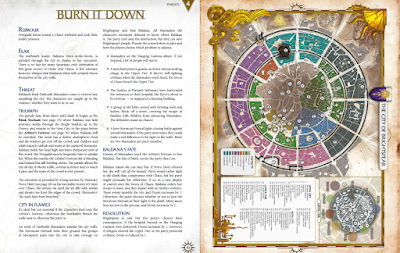 There is much to lament here, too - not a railroad exactly, but close. With all that said, a large bunch of one-page adventures, serving as springboards/examples, is probably much more useful in a starter set than a Great Big Fucking Campaign, and what's here is at least relatively light-touch in terms of stats and infodump.

What intrigues me most about what is implied here, taken together with the previous screenshot. The setting for the starter set is Brightspear, a city recently reclaimed from the forces of Tzeentch, and teetering presumably on the brink of reconquest at any time. It also seems as though there is a 'Doom' mechanic - perhaps a kind of ticking clock - which results in the gradual accumulation of 'Doom' points, which at 5, or 10, or whatever, trigger an apocalypse or invasion or something of that kind.

That theme - a city permanently besieged by unrelentingly hostile enemies, and facing an ultimate and inevitable doom that can only be staved off but never defeated - pushes all the right Viriconium/Utolso Varos /Byzantium/Principality of Theodoro buttons, and in itself tempts me. But it also raises the question: have the Age of Sigmar guys been reading Lanthanum Chromate at all? Because if Soulbound seeks to adopt a tone, a city which is nightly confronted with invasions instigated by the King of Hell, but which is protected by crazy and eccentric guardians who throw back the forces of evil by dawn each day, does feel like it might be taken from the same broad palette.

In any event - what is wrong with me? - I do feel half-tempted to get this, if as nothing else a palate-cleanser after an awful lot of D&D megadungeon meatgrinding. Can I get behind a game in which the PCs are all mighty heroes charged with smiting chaos in the unholy hybrid Planescape-meets-Warhammer that is Age of Sigmar? No, but 12 year old me can, and he's still down there somewhere.