There Are Neither Gates Nor Keepers 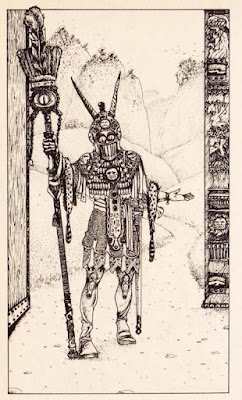 [T]he outside world is subject to the law of imperfection; there it happens time and again that one who gets bread is one who does not work, that one who sleeps gets in greater abundance than one who labours. In the outward world everything belongs to whoever has it, the outward world is subject to the law of indifference and the genie of the ring obeys the one who wears it, whether he be a Noureddin or an Aladdin, and whoever holds the world's treasures does so however he came by them.

It is otherwise in the world of spirit. Here there prevails an eternal divine order, here it does not rain on the just and the unjust alike, here the sun does not shine on both good and evil, here only one who works gets bread, and only one who knows anguish finds rest, only one who descends to the underworld saves the loved one, only one who draws the knife gets Isaac. He who will not work does not get bread, but will be deluded, as the gods deluded Orpheus with an airy figure in place of the beloved, deluded him because he was tender-hearted, not courageous, deluded him because he was a lyre-player, not a man.

We hear a lot about 'gatekeeping' in the world of RPGs. There are, apparently, keepers of gates, and they exercise a great and arbitrary power over all they survey - a complete discretion that allows them to identify those that they like, the sheep, who they usher through into their green pasture; and the goats, who they hate, and keep outside in the barren wasteland.

The phrase is most often deployed when it comes to publishing. The reason that one fails to find an audience, to 'make it', to achieve greatness, is due to having been singled out as a goat by the gatekeepers, and all that one can then do is to look plaintively in from beyond the fence at the sheep in the green pasture, who work tirelessly to promote one another's work and grow fat and hearty on the juicy wet grass. You, the goat, must live off scraps in the wilderness; you, the goat, are an outsider; you, the goat will never amount to anything because you can only be the vector of forces beyond your control.

But it is also sometimes even a complaint when it comes to the mere playing of the game. The sheep, it is said, exclude the goats. The sheep do not like anybody coming along and disrupting how things are done in their pasture. The sheep are against change. The sheep discourage, dissuade, bully and ostracise, and thus exert an iron grip on participation in the hobby.

Both of these myths are, of course, absurd. There is no 'gate' when it comes to publishing, not since the internet blew the whole thing apart in the 2000s, and there is nothing stopping anybody picking up a copy of D&D and playing it with their mates - you can even buy it in Waterstones these days, and in the unlikely event you can't figure out how it works for yourself, you can go on YouTube and watch probably hundreds of millions of hours of videos explaining how. Ultimately, there is nothing stopping anybody doing anything they put their minds to, except for their own inertia, shyness, lack of motivation, busy lifestyle, and so on, and those ought not to be considerations at all.

That is not to say that there is no injustice or unfairness in the way in which the world arranges itself. In publishing, of course, there is a bias towards incumbents that can be hard to overcome for newcomers in a crowded marketplace. And there are, it is certainly true, a number of demagogues out there with large followings who are keen to pontificate about badwrongfun and insist on their own variation of the One True Way.

But Kierkegaard is instructive in this regard. As our Danish friend points out, the acknowledged and unavoidable unfairness of the outward world is immaterial to what happens within us. We have no control over the world, but we do have control over ourselves. And within those limits, we can elect to work, or not work; to descend to the underworld, or fail to; to draw the knife, or refuse. We cannot bend the deterministic world to our will. What we can do is elect to exercise our will, or not. Faced with the fact that doing something is difficult, we can either try to do it anyway, or not do it at all. Which of these is better? Will we act? Or delude ourselves into thinking we can receive 'bread' without endeavouring to act in the first place?

There are neither gates, nor keepers. But even if there were, their existence would have no effect on one's own decision to do whatever one wished.