The Influence of Roguelike Visuals

A player in my regular online game posted some examples of my maps: 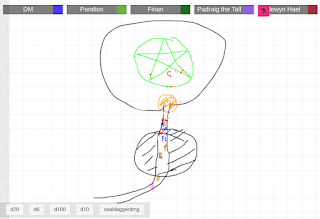 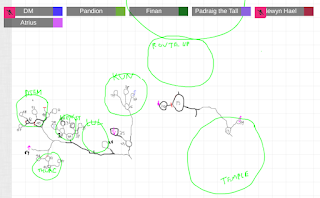 Roll20 has all kind of fancy functions, but I'm too old now to be bothered how to learn. I would rather just scrawl things on the screen with the rudimentary drawing function. It does what it needs to. And it also, I think, spurs the players to use their imaginations rather than getting caught up in what they can see.

I never really thought of it this way before just now, but looking at these maps of mine with fresh eyes, it seems evident to me that my aesthetic experience of playing and running D&D is very strongly influenced by having wasted vast swathes of my teenage years playing *band games and other roguelikes, squinting at maps like this: 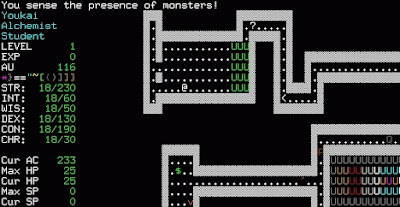 Shorn of box office visuals (or any visuals at all, really), the brain has to make up for it by doing a lot of imaginative legwork. This is the genius of ASCII-based roguelike games, of course: by providing an initially alienating aesthetic, they end up becoming more immersive than the most cutting edge PS5 offering, because you get caught up in a world that is as much, if not more, a product of your own imagination as the designer's. (The additional stimulation to the brain is also partly, I think, what makes them so addictive.)

The phenomenology of the visualisation of events in an RPG is fascinating to me. When a DM describes to four players a room in a dungeon, each of the five participants will build an image in his or her mind. Usually, this works tolerably well - well enough for everyone to have the same rough idea of where and what everything is. Yet we will never be able to tell how close their independent visualisations are to each other's, or to that of the DM. Every player in every RPG session ever played has created their own independent representation of a particular reality in their own mind, and it is one that can never fully be revealed to anybody but themselves. This is, you know, deep, man.