The Deep and Wondrous Complexity of the World

One of my addictions - perhaps the most profound and difficult to break - is going on forays through wikipedia, beginning on the entry for something I'm interested in (in this case, the Chechen language) and then following links to whatever catches my eye, so as to end up on, say, the ancient kingdom of Colchis.

These expeditions across time and space never fail to reinforce just how complicated human history is - how many layers upon layers of politics, ethnicity, language and culture we have laid across the surface of the world.

Take Colchis, for example. Thought to be "the earliest Georgian formation", it was perhaps populated by "early Kartvelian tribes", but there are also many Abkhaz, Scythian, Anatolian, Iranian, and Greek place names, and wikipedia tells us that "any of these groups could have constituted the ruling class". One of its major settlements, Discourias (modern Sukhumi, in Abkhazia/Georgia), was founded by Greek settlers in the 6th century BC; "the city and its surroundings were remarkable from the number of languages spoken in its bazaars" (between 70 and 300), and it was a major centre of commerce between the Greeks and the ancient Colchian tribes (for which, naturally, there is a separate entry on wikipedia). 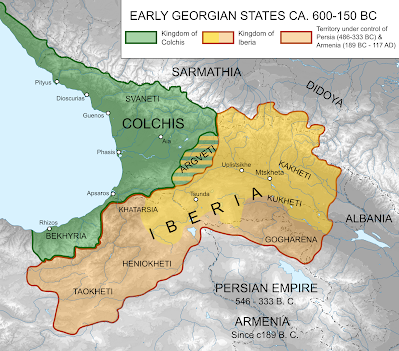 Reading the history of Discourias itself reinforces the point. It was a major supporter of Mithridates VI of Pontus in his struggle against the Roman Republic; it eventually became part of the Roman Empire but was demolished so as to avoid its capture by Sasanians. It was then restored by the Byzantines but sacked by the Arabs in the 8th century AD, before ultimately being restored again by the Kings of Abkhazia and then flourishing during the Georgian Golden Age as a major centre of trade with Genoa. Occupied by the Ottomans, changing hands between Abkhazians and Mingrelians, and it was then stormed during the Russian conquest of the Caucasus in 1810. During the 20th century it saw war, revolution and ethnic cleansing; its 2003 census lists Abkhazians, Armenians, Estonians, Georgians, Greeks, Russians and Ukrainians among its population.

A cursory knowledge of the history of the world reveals it to be of such complexity, variety and interest that no fantasy setting could ever be its match in richness or fascination. One is also reminded when reading it of Voltaire's maxim that "History is only the patter of silken slippers descending the stairs to the thunder of hobnailed boots coming up from below". Empires rise and fall, each leaving behind them yet more intriguing detritus for us to pick through.