Tom Kilian continues his work on illustrations for The Great North (formerly The Meeting of the Waters), soon* to be released by yours truly.

Here are some more of his developmental pieces. Lovely work, I am sure you'll agree. Accompanying text is from the book itself: 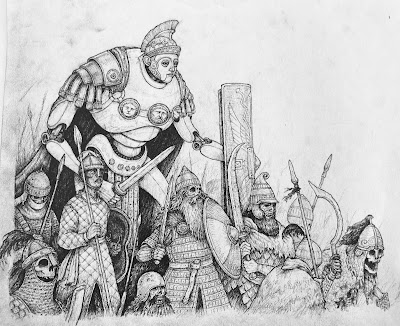 When the Emperor left the Great North, his mechanical servants remained. Whether this was because they had tasks allotted to them that were still incomplete, or simply because he had no further use for them, no one can now say. It certainly appears as though many of them are still mindlessly performing missions that were given to them in those ancient days - repetitive, laborious acts long ago rendered futile by the passage of time and the changes taking place in the world around them. Others, however, only seem to be standing in disconsolate stillness - as if one day the reason for their continued functioning disappeared and they have had nothing to do ever since but wait.

There are seven basic types of automata, although there are also many sub-types. All are made of supernaturally hard porcelain and animated by some unknown force. They can communicate in the Imperial tongue if required to do so by their role, and are generally non-aggressive unless their role or task determines otherwise. They can also usually be commanded by the use of a special long-forgotten code words or phrases in the same manner as the spell of that name. Below is a guide for creating a typical example of each type; use the basic stat block provided and then provide it with all or some of the stated ‘additions’ accordingly.

Typically humanoid, although frequently it has multiple pairs of arms, and specialist ‘hands’ for hammering, cutting or lifting.

Typically many-legged with a large, flattish frame. It may be dog-sized, horse-sized, or even larger.

Typically a squat humanoid, compact but immensely strong, and possessing limbs for tunnelling, rock-smashing, and wall-breaking.

2 - Shove attack (does only 1d3 damage but knocks opponent flat; opponent cannot then act in the next round except to stand, and is hit automatically if attacked)

Typically a humanoid with axe, sickle, and/or shearing limbs, designed for clearing vegetation.

Can take any form, being designed to defend or watch over some fixed location: a soldier, a lion, a wolf, an eagle, etc.

3 - Emits poison or sleeping gas from the mouth, eyes, etc. (6’ cube, acts as a stinking cloud or sleep spell) 1/day

Typically a tall, long-legged humanoid, designed for patrolling the borders of the Empire.

A handful of lost remnants from the time of the Empire, unable either to die or to perform their original function to any discernible end.

When the Emperor ruled the Great North, he brought men from the farthest reaches of his realm to fight for and serve him there. They are all long dead, and Imperial power has gone from the land, but loyalty to the Emperor himself does not fade easily from the human heart. Thus many remain, beyond death, clinging to the hope that he will someday return.

*Undead, and hence immune to sleep, charm, command, and other mind-altering spells 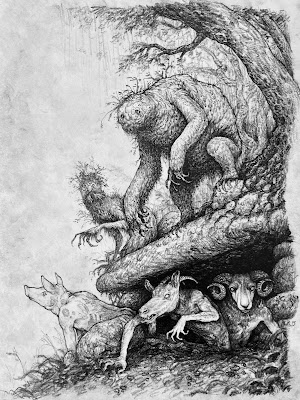 Wicked man-shaped things made of gorse and matted grass given hideous tensile strength, and with pale yellow eyes like amber. They act with clear purpose, as though playing a part in some great but inexplicable scheme, and may travel long distances to put those purposes into effect.

Violent and spiteful animal-headed spirits with a romance for cruelty. They lurk in wild places in the open air, oblivious to, or even savouring, the bite of the cold wind and the seeping wetness of the rain.

Dragons came to live in the wild, high places in the Great North in the world’s adolescence, long before the existence of the emperor or even the elves, and they will be the last to leave, when the ancient hills collapse into the sea.

*In this context, 'soon' should be interpreted to mean 'not any sooner than a year'.

Email ThisBlogThis!Share to TwitterShare to FacebookShare to Pinterest
Labels: the meeting of the waters