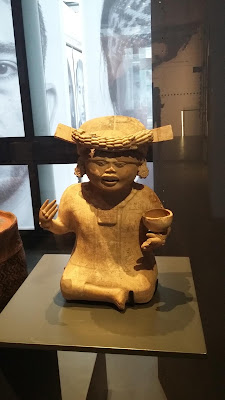 I recently got back from a business trip in Santiago de Chile, home of the fabulous Museo Chileno de Arte Precolombino. What one cannot help but be impressed by, when walking around its galleries, is that human civilisation is so layered. One culture rises to prominence, then appears to fall, and is then replaced by another - over and over again, like coats of paint being applied and then reapplied to a surface as each wears away. Of course, people at that time presumably had no clear conception of this (we are the Chimu culture, and before us there was the Moche culture, and before that there was the Chavin culture, and before that there was the Cupisnique culture...). But they would certainly have had a conception of living in a world that was in some sense inhabited before them and had within it the monuments, ruins, and items - the cultural clutter, you might call it - of peoples of the past.

By coincidence, I had just finished reading Max Adams' book In the Land of Giants, about Dark Age Britain. In it he describes how people in that era living in England literally thought of themselves as inhabiting a landscape which was full of things that giants had built - not least of which being Hadrian's Wall. Those people did not have an accurate understanding of their history. But they certainly knew that they had one - the stuff of it was all around them.

We have a lot of cultural baggage associated with the fall of the Roman Empire, which makes us think of this aspect of historical change in terms of collapse. A great civilization rises, then falls into ashes, and an age of barbarism ensures - from which, eventually, another great civilization then duly comes into being. James C Scott is persuasive in arguing that this is probably a mistake. What is thought of as "collapse" in most such circumstances was probably a period of comparative liberation and much better health for ordinary people, who were no longer oppressed by the drudgery of economic servitude or out-and-out slavery which they had likely previously been subject to, and had much healthier diets and lifestyles living as so-called "barbarians" than farmers in an early proto-State.

The Americas in the era after Columbus stand out as probably the most important exception to this rule - the Aztec and Inca empires may not have been pretty, but their collapse was most certainly that, in terms of population loss and cultural destruction. Be that as it may, a D&D campaign set amidst the detritus, the monuments, the ruins and the cities of old civilizations long-gone is one that makes perfect sense: it is the milieu in which our ancestors have lived since time immemorial (and one which of course we still live in today).
Posted by noisms at 01:36