Size and the Inert Sandbox 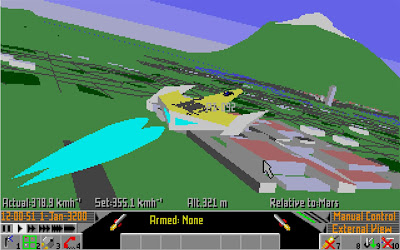 When I was a lad, I spent quite a bit of time being befuddled and disappointed by the Commodore Amiga game Frontier: Elite II. For those either too young or too cool to have been into computer games in the early 1990s, this was a space exploration and trading simulation which was fairly unusual for its era in being entirely open-ended and, well, sandboxy.

The promise of Frontier has rarely been matched (although it's my understanding that nowadays there are games available which have a similar ambition). Although it came on a single floppy disk its scale was truly vast - it produced procedurally generated galaxies thousands of light years across, with realistic distances between its stars, and complete planetary systems around each of them which could be freely visited and explored. It aimed to accurately model Newtonian physics in the movements of objects in space, and everything in its universe - from stars to planets to space ships - was entirely to scale. It was a truly monumental achievement for its era.

I loved thinking about Frontier; I loved talking about Frontier with my friends; and I loved the thought of getting home from school each day so I could play it. Unfortunately, though, the actual "lived" experience of playing the game was dull. Much of the gameplay was simply glorified arbitrage on a grand scale: buy grain in Planet X at such-and-such a price; sell it in Planet Y for such-and-such-a price and then buy slaves; go on to Planet Y and sell them for a huge markup; buy narcotics; return to Planet X and buy a shitload more grain. Repeat ad nauseum. This was punctuated by fiddly, repetitive space combat which was always either too easy or too difficult, and the occasional attempt to find more profitable trading routes elsewhere, or other things to do such as carrying passengers from one place to another, out of sheer boredom.

The problem was scale. For all its astronomical and physical accuracy and for all of its vast scope, there just wasn't very much going on in Frontier. There was a galaxy of 100,000,000,000 stars to interact with, but there was nothing much other than that. You couldn't get out of your space craft. You couldn't talk to people. You couldn't make friends or enemies. You couldn't get involved in intrigue or espionage. And you couldn't really do much with your money except for buying more commodities to trade, a bigger space ship to carry them round in, and better weapons to vanquish the irritating pirates and other enemies who might come your way. If it had had only 100 stars to visit, but real stuff going on - wars, factional rivalries, interesting NPCs with real motivations - it would have been infinitely more interesting and exciting to actually play.

There is a lesson here for DMs. When it comes to a campaign setting, less is more (within reason). A small hexmap - both in actual area and in number and size of hexes - with plenty going on in it is a far better basis for long-term enjoyable play than an entire painstakingly mapped-out continent with too much space to fill. A 10 x 10 hex map of 1-mile hexes you can stuff to the gills with lairs, dungeons, settlements and interesting NPCs who all know, or know of, each other and have networks of rivalries and alliances as a result. A 100 x 100 hex map of 6-mile hexes takes a lifetime to even key, let alone run, and will feel largely empty and featureless to run. The bigger the sandbox, the more inert it becomes. And the smaller the sandbox, the more enjoyably dense (to the point, of course, at which it becomes so small it is quickly exhausted). When it comes to campaign settings, big may be beautiful, but small is fun.

(You don't have to take my word for it as far as Frontier is concerned: you can download a freeware version of it here. However, I strongly recommend you try the smaller and denser and hence more enjoyable Oolite instead.)