On Linnaean and Glaurungian Monsters 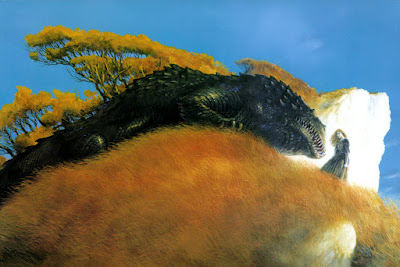 Back in 2008, when the world was young, I wrote this post, the essence of which was that modern fantasy tends to sit in between two different poles. On the one hand, there is classicist fantasy (in which everything in the setting is internally consistent and explainable on its own terms, even if it contains magic and monsters) and on the other, romanticist (in which the whole point is the weirdness, the mystery, the fact that nothing makes sense or can be predicted in advance). The quintessentially classicist fantasy writer is probably George R R Martin, whose A Song of Ice and Fire novels feature human beings acting in basically rational ways in the world that they inhabit, which contains magic that, even while it is rare and unpredictable, can be dealt with roughly as a form of strange super-technology. The quintessential romanticist writer is probably M. John Harrison, the entire point of whose fantasy novels is to express a kind of illogic or unreality; not even the characters feel as though they are at home in the world that they inhabit.

The classicist tradition is very clearly at work in D&D, particularly when it comes to what I am going to from now on call Linnaean Monster Classification. You know how in the AD&D 2nd edition Monstrous Manual there is no individual entry for "dragon", but instead dragons are classified into white dragons (which live in cold places), black dragons (who live in swamps), blue dragons (who live in the desert), amethyst dragons (who live in underground lakes), shadow dragons (who are from the Plane of Shadow), and all the rest? And there is no individual entry for "giant", but instead you get cloud giants, frost giants, reef giants, stone giants, and so on? Most of the truly iconic monsters are given this treatment to some extent or other: they are sliced up, boxed up, compartmentalised and classified, as though there is an actual genus, "dragon", with species within it.

(There are perfectly sound practical reasons for this: it provides more variety for DMs to draw from when filling up their boxes of tricks.)

Compare this with how the dragon appears in, say, Beowulf. (Or The Hobbit, for that matter.) It's not so much that people in 8th Century Scandinavia, or Middle Earth, didn't have the time or expertise to catalogue subdivisions of dragon types. It's that in their context monsters are really monstrous: not just another kind of animal, albeit a very dangerous one, but a thing apart from the natural world - something which does not belong; an interloper; a Thing Which Should Not Be. You get a great sense from this in Tolkien's description of Glaurung in particular as a being whose very presence seems somehow to soil the natural world around him. Glaurung is not of the animal kingdom. Glaurung is a dragon.

Another way of thinking about this is: the assumptions of the AD&D Monstrous Manual are that, if only some sage somewhere had access to all the necessary information, he could provide an accurate taxonomy of dragon species which reflected some underlying biological reality. That is classicism in a nutshell. The assumptions of the Beowulf poet or Tolkien are not that this task would be impossible  at a practical level; it's that the attempt at classification itself would be a category error. You don't think of a monster in that way. It just is.

There is nothing wrong with the normal way in which D&D bestiaries approach the matter. It makes life easier by providing DMs with a wide range of choices for encounters and lairs. But it does, to hark back to another 2008 post, have a banalifying effect. The dragon in Beowulf, or Smaug, or Glaurung, or even Falcor, loom far larger and longer in the memory than the Just Another Gold Dragon of your average D&D campaign. The next time you're thinking of a monster lair to put in your hexmap, think about how you can lean it towards the Glaurungian rather than the Linnaean, and see if it makes a difference to how the PCs interact with it.
Posted by noisms at 04:31