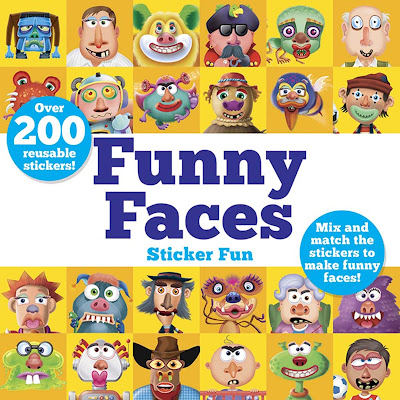 Have you ever had one of those sticker books which contains a load of blank faces and a random assortment of eyes, noses, mouths and the rest, allowing you to make your own "crazy" characters?

There is a kind of D&D equivalent. It works as follows.

First, you choose a list of monsters. It could be 6, 10, 20, the whole Monster Manual, whatever. For the sake of illustration, let's go with 6: black pudding,  blue dragon, derro, storm giant, harpy and basilisk.

Second, you break your monsters of choice up into their body shape (meaning a very basic physical description), their flavour characteristics (meaning a thumbnail sketch of their "personality" or behaviour), their special abilities (including magic), and their level or organization. Hence: 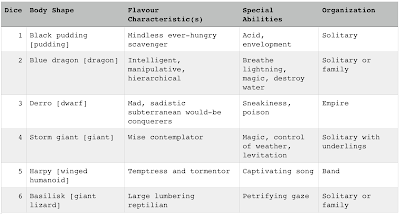 Third, you roll some dice accordingly - 4d6 in this case.

Monster One: 4, 2, 1, 6. So it is something that looks like a giant, is intelligent, manipulative and hierarchical, can spray acid and envelop opponents, and lives on its own or in a family. Here, I am imagining something which, while it resembles a giant, is actually something like a slime mold or gargantuan humanoid spore - an amorphous semi-solid colony-type entity which forms itself into a vast and sentient walking monstrosity oozing corrosive and noxious fumes and fluids.

Monster Two: 3, 2, 4, 2. So it is dwarf-like, intelligent, manipulative and hierarchical, can cast spells and control the weather, and is solitary or lives in family groups. This is perhaps something akin to the Icelandic huldufolk: a race of diminutive spirits who can manipulate the weather and their environment by channelling the magical energy imbuing the natural world - probably in a manner which strikes humans as capricious and cruel.

Monster Three: 4, 3, 6, 3. Another giant-thing, which is a mad, sadistic would-be conquerer, has a petrifying gaze, and forms an empire. All I can say to that is....nice! A race of giants who can turn their foes to stone with a mere glance, and who constantly attempt to use this power to bend entire continents to their will - an endeavour in which they would undoubtedly be successful were it not for their inevitable tendency to descend into hereditary insanity....
Posted by noisms at 01:37