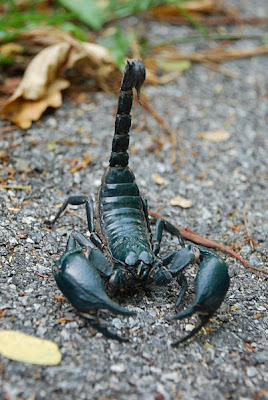 20 types of scorpion found in Yoon-Suin, for your amusement and edification. All scorpions are 1 hp monsters, with 1 attack; sting effects are listed as "failed save/successful save".

Scorpions are small, unobtrusive, and good at hiding. They always surprise their opponents unless forewarned that scorpions are in the area and characters are actively searching (1/4 movement rate); there is a 25% chance a randomly determined character will step on the scorpion and incur an attack which hits automatically. Thick boots protect against this.