Into the Abyss: More on Being the Good Guys 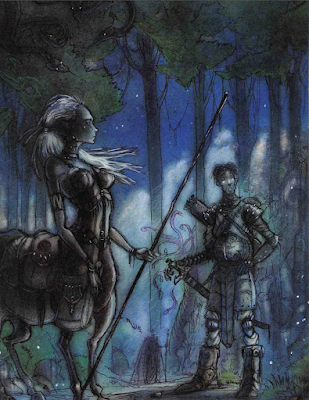 This is one of my favourite pieces of Diterlizzi's Planescape art. (It's from Planes of Chaos.) On the face of it, it's no masterpiece, though I do like the way it is composed, with that wizard-like figure in the background (is he a friend, another one of the party, or a foe, who the two adventurers have sensed watching them but not yet seen?). What I like about it is what it signifies in its context: this is a picture purportedly set in the Abyss. But this isn't your father's Abyss, all cramped tunnels and lava and torture chambers. No - this is a forest under a crepuscular, starlit sky. It hints at both vastness and variety: hell is infinite, and thus possesses infinite scope for demonic creativity. You're not stuck with the basket of caricatures and cliches that the word "hell" tends to conjure within the mind of modern Western man.* The Abyss, this picture tells us, can resemble more or less anything.

(Rather boringly, the text accompanying the image is about a "viper forest" in which the vines on the trees are snakes. This is one of the main problems with Planescape in a nutshell - a vast canvas on which are ultimately painted rather mundane ideas. I prefer to imagine an infinite forest permanently shrouded in twilight, from which the stars themselves descend silvery entities in love with sorrow.)

In any event, looking at this picture at Easter I return to the theme of rethinking old school D&D from a self-consciously good against evil perspective. The Abyss as an endless pit of malice from which emerge a constantly-changing array of demonic entities to trouble humanity; the PCs as, while not necessarily paladins in the classical sense, knights-errant (literally or figuratively) who wander the land - and perhaps also the Abyss itself - to right what wrongs they can. The underlying theme being something like that informing The Star Thrower; one can't possibly win the war against entropy, but one can win some battles, however small, and that is worth doing.

My previous post on the topic and the comments mention various ways in which to revamp the XP system so as to reward "rescue" rather than looting. I would also consider it necessary to come up with methods for generating Abyssal layers and also their inhabitants in very wide scope - I would want to have an extensive series of nested tables which produce genuinely non-repetitive, novel results for both. There would also need to be a similar series of tables for generating events - episodes in which the Abyss and its inhabitants come into contact with the natural world - so as to create the feeling of constant and evolving threat.

What I picture in other words is a campaign set on a hexmap with dynamic contents, in which interlopers from the Abyss appear to wreak a wide variety of wrongs, and which also contains entrances - almost certainly in obscure and isolated places and requiring special rituals or procedures to open - to the Abyss itself. The PCs can engage with all of this content actively or passively: they can wait to be 'hooked' with requests for help, or they can range freely across the sandbox, even delving into the Abyss should they wish so as to find innocents to rescue and foes to smite.

I wonder if I would even want to egg up the Judeo-Christianity and daub this on the canvas of an ancient Near East, or a Dark Ages Europe, in which the fight against The Accuser is real.

[I am running a Kickstarter throughout April. You can read more about it, and back it, here.]