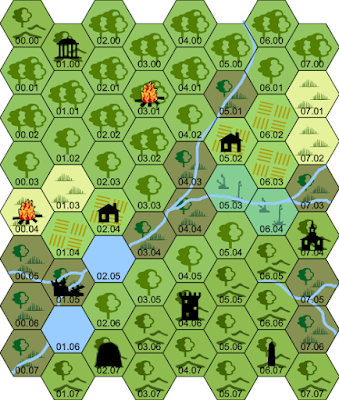 Yesterday's post was about a campaign in which the PCs are figurative or literal knights-errant in a world beset by incursions from the Abyss. I threw together this little illustration of what I meant - the real life version would be much bigger, more detailed and better in every respect.

First, the key to the hexmap, scale 1-mile:

Now that the basic setup is in place, we come to the Demon Incursion Generator. The idea here is to create a dynamic environment in which the PCs can either act at their own initiative, following up rumours, or be enlisted into 'quests' depending on taste. (Or they can simply go to the Abyss itself to explore, through the Fivestone Gate at [06.07].) Demonic incursions, in order to be interesting, are tied to existing hex contents: the demons are here for a reason, and interact with the natural world in more interesting ways than just "they want to kill people".

The core of the system would be that every 1d30 days of game time, there is a chance of a demonic incursion (say, 1 in 3). For every demonic incursion, the DM would then roll on a set of nested random tables to find out the type of demon, its mission, where it appears and so on, and use that to create hooks. These tables in greatly simplified form would resemble something like this:

Incursion Location
So, giving it a whirl, I just rolled for two incursions and got:
So now, hey presto!, you now should have no problem generating hooks from that material.
I would suggest beginning a campaign with a much larger regional hexmap with many more locations and interesting contents, and a far bigger and more extensive set of tables to generate incursions. I would begin with, say, 6-10 incursions already in effect, so as to generate a set of beginning rumours. (One of these, of course, would refer to the gate to the Abyss itself - and there would be a further set of tables for generating Abyssal contents too.) And then I would have the PCs begin as newcomers to the area who fancy themselves as "regulators" - and watch from there.
[I am running a Kickstarter throughout April. You can read more about it, and back it, here.]
Posted by noisms at 00:01