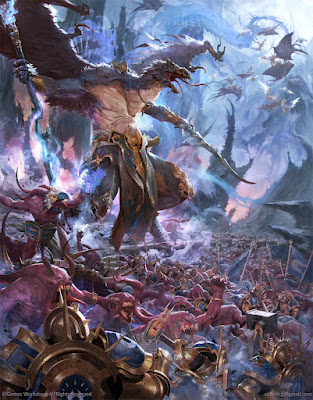 To paraphrase Edmund Burke, what separates human beings from flies is that human beings live their lives at the end of a vast chain of culture and tradition that connects them to the very distant past, and which they will pass on to their children, grandchildren, great-grandchildren and so on in their turn - and perhaps, if they are lucky, even add to. Flies simply repeat the biological lives of their parents in more or less identical fashion.

To put it slightly over-simplistically, humans have a history and flies do not.

It follows that if you can eliminate from human beings a sense of historical continuity and any tie to the past then you can essentially abolish humanity as a distinct category - they will be a mere animal species like any other, living out their lives in meaningless repetition of biological exercises.

This, it seems to me, is the unstated goal of the forces of Chaos, whether in its Warhammer, Warhammer 40,000, Fighting Fantasy, early D&Dish or Moorcockian guise. Chaos is the pursuit of sheer, unbridled whim - or, alternatively, devotion to the excess of vice. In this, it actively militates against history, culture, and tradition. The goal (or perhaps I should say the byproduct) of Chaos is in other words to achieve Burke's nightmare: a world in which human beings are no different from the 'flies of a summer' except perhaps by virtue of the fact that what they do is a little bit more complicated than mating, buzzing around aimlessly and feeding on shit.

In case there is any doubt about this, think about Chaos's opposite, which is Law. Law (and here I am riffing on the work of Maurice Hauriou, among others) is inescapably and indelibly historical in the deepest and most profound sense. Most obviously, law is a product of the past; the moment after a law is created it is literally in the past, of course, but more significantly the most basic laws in any society - the prohibition of theft and murder; the enforceability of promises intended to be binding; the remediation of unjust enrichment, etc. - always derive from very ancient rules that are essentially unchanged over thousands of years. And at the same time no law is created without the intention that it should also regulate conduct not just now but into the future, and ideally far into the future - law does not reside in a museum, but continually informs human behaviour like a 'living instrument'. In this sense, law acts to bind the past, present and future of any society which possesses such a concept - the rules which the parents created are binding on the children, and will continue to be binding on their children in turn. It is one of the means by which continuity is assured.

The existence of law necessarily therefore involves an understanding of history and the continued existence of a culture. Where law exists human beings are absolutely distinct from flies. It therefore follows that Chaos can be understood as the insistence that there should be no law (perhaps I should write 'Law'), and therefore no continuous basis for the regulation of human conduct and the disintegration of the distinction between human and mere biological life.