Life in the Unremembered City 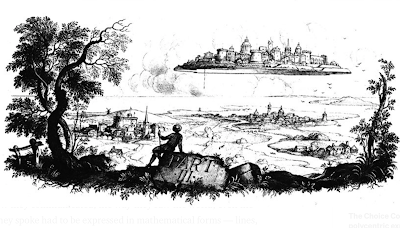 The Old Naacals who remain in the City are few now, and have long been rendered senile, sadistic or strange. They roam in its wastes or lurk in isolated towers and ziggurats, companioned only by their servitors; the Young Naacals shun them in fear and distaste. It is the latter who form what society exists.

That society is found in what have come to be called the Plazas. No authority exists that is capable of counting how many Plazas there are, and no living person is known to have ever traversed the geography of the City in order to ascertain the number. (Indeed, it is widely thought that travelling across the breadth of the City would take longer than a single lifetime.) All that is certain is that, dispersed as they are - separated from one another by vast swathes of wilderness - there are very many of them; possibly thousands.

Each Plaza is independent, autonomous, and largely isolated from the others, and each consists of a wide, flat space, usually several hundred metres across, surrounded by high ziggurats - often partially ruined and lying empty, and subject to strict taboos. The people of the Plaza live in the open area, which they generally divide into residential, religious, commercial and entertainment districts with the cunning use of walls and curtains - though many exceptions exist. (There are indeed Plazas in which the inhabitants live together in a communal throng, conducting all of their activities in public, and others in which they construct elaborate, labyrinthine hives; there is even rumoured to be a Plaza somewhere in which the people go about blindfolded so as to maintain the strictest standards of privacy.) Each Plaza's culture is distinct, and dependent to a great degree on the interpretations its people give to aspects of the pantheon of gods whom the Naacals worship. A Plaza, for instance, might largely venerate Shezmu, and emphasise the lion god's love of dancing; another, venerating the same god, may instead take inspiration from his love of blood and slaughter and form a public religion and cultural life very different from the first. Since there are well in excess of a hundred gods in the pantheon, the result is a patchwork of religio-cultural variety of bewildering scale and scope.

The City's networks of canals, where they remain clear and safe to traverse, link its Plazas together. Typically, access to these canals is restricted to particular classes, guilds or clans, and jealously guarded, because it is largely only through these arteries that wealth still flows about the Unremembered City. Anybody seeking to travel from one Plaza to another without using a canal would have to do so on foot, and this would mean a dangerous journey across miles of waste ground - ruined ziggurats, towers, temples, and tombs; overgrown gardens, parks and cemeteries; ancient reservoirs and aqueducts captured by the wild and transformed into murky lakes and pools; strange monuments and fields of broken stone - and all of it populated by outlaws, mad servitors driven to malice and cruelty by malfunction, crazed Old Naacals muttering and malevolent, and carnivorous plants and wild predatory beasts evolved over eons to savour the taste of human flesh. For these reasons, it is rare that an inhabitant of the Unremembered City ever leaves the Plaza of his or her birth, save for those occasions when marriages are arranged between the youths of one Plaze and another; it is through such mechanisms that the pools of familial inheritance among the Young Naacals do not grow brackish and stale.