Life in the Unremembered City (Cont’d) 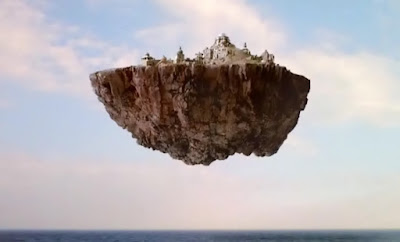 How the Unremembered City floats, and what dictates its movements through the sky, are questions whose answers are now unknown - except perhaps in the fragmented memories of the Old Naacals. That it does float is widely understood, because of the widespread existence of holes in its surface - some tiny, some many hundreds of metres in diameter - which reveal great vistas of cloud, ocean, and land far below. And, of course, the people of some Plazas live close enough to the City's edge to be able to simply peer over, which is invariably a source of delight and very often provides an opportunity for elaborate daredevil games.

In some places, moreover, there remain antique flyers - now temperamental and difficult to command, but still usable - which allow travel to occur between the City and the land. Through this method limited congress takes place between the Young Naacals and the barbaric people who inhabit the Somniatic Earth, and as a consequence there can be found small numbers of traders, envoys, entertainers and slaves throughout the City's Plazas who originated below. In some locations, indeed, there a semi-permanent communities of these barbarians, tolerated because of services they are able to perform, crafts that they provide, or even simply because the local Naacals find them unusual or charming.

The City usually suspends itself several thousand feet above the surface of the Somniatic Earth, high enough to often be obscured by cloud, but low enough to be able to pass through rain clouds and hence prevent drought. It does not go close to high mountain ranges, whether due to an internal mechanism or innate intelligence or something other; aside from this, there is no discernible pattern to its motions, although this does not prevent legions of soothsayers, astrologers, sages and priests (both on the City itself and the Somniatic Earth) from claiming the capacity to identify one.

Occasionally segments of the City collapse and plummet to the earth below, usually without warning. To be caught in such a fall is the great fear or all who live in it, but it also probably accounts for the great vitality and energy with which the Young Naacals tend to pursue their endeavours. The prospect of the ending of one's life, which is common to us all, is to the inhabitants of the Unremembered City particularly acute, and they live their lives with gusto as a consequence.