'The Great North' is the working title of what I have previously referred to as, amongst other things, 'Northumberland Yoon-Suin' and 'The Meeting of the Waters'. It adopts the same basic approach to creating a campaign setting as Yoon-Suin did - being a toolbox with which the reader can create his or her own version of the region. In this case, the area in question is loosely based on the desolate and debatable region between England and Scotland, and can be thought of as being the equivalent to it in the same way that Yoon-Suin is very roughly like the real-world Himalayas and its foothills.

The text has long been complete. I wrote it in what felt like a fever dream during the original 'lockdown' of March-June 2020, generally waking at 4.30am and writing for 3 hours or so while I had the house to myself (a productive fugue which I sadly was not able to keep going indefinitely). Now, the art is coming together - it is been done by the fabulous Tom Kilian. Tom has recently sent through some early development sketches, and I thought I'd share some of them on the blog, together with snippets of the writing which inspired them. The images contain quite a bit of negative space because they will have room for text in their final iterations, but I'm sure you will like them as much as I do.

Barghest - 'A malevolent and vindictive shapeshifter sighted in its animal form at night or at times of grief, but otherwise walking the earth in disguise as a solitary man or woman...' 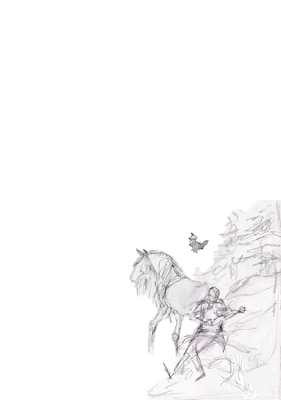 Beast - 'A large, wild, dangerous animal, whether natural or magical...' 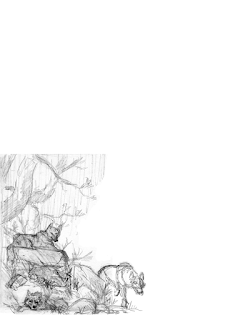 The Brown Men - '[R]umours also tell of the islands which stand off shore. A cluster of two dozen of them, the Brown Men, lurk on the surface like the exposed backs of a pod of impossibly large seals. Some are mere rocks, but others are big enough to carry towers, fortresses or other ruined buildings, clearly visible from the shore. Biggest of all, like a vast mother which pupped these islets, is the place men call Unholy Island - joined to the land for a third of the day by the retreating tide. The rumours about that place bring few visitors indeed....' 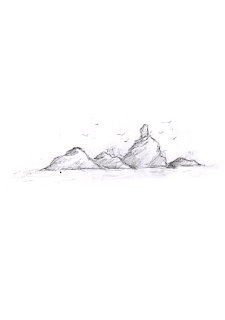 Ettins - 'The left head is full of spite and cruelty, and controls the body. It enjoys committing acts of the most repulsive malice in order to better torment the right head, which is sensitive and sorrowful, but lacks any power over the body’s actions. All that the right head can do is plead with the left to refrain from whatever vile course of action it is pursuing - to no avail.' 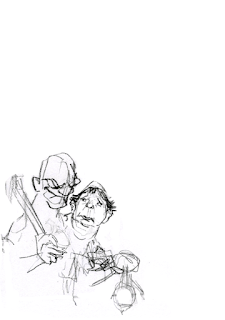 Green Man - 'A spirit of the forest, vengeful and fierce, proudly protective, or fecund and virile. He appears as a robed man with thick green beard and hair, disgorging leaves and vines and other foliage from his nose and mouth, and walking without a sound.' 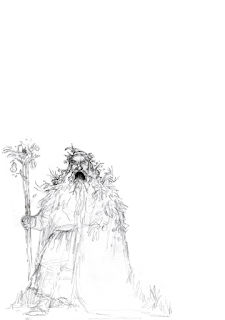 Hrotha - 'Hrotha is a wizard with a thick black beard that bristles almost to his feet, and hair to match it. His violet eyes twinkle from a tanned face creased by laughter lines and his nose and cheeks are red with humour and the flush of wine. He is the image of avuncular affection. But he carries an iron rod, and rules with it both literally and figuratively. None of the populace dares to cross him, and his vengeance when he feels himself slighted is terrible.' 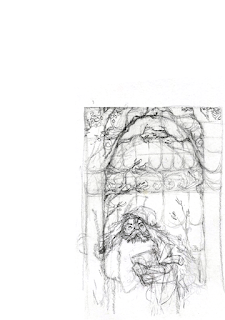 Joyous Garde - 'Joyous Garde is under the de facto rule of its burghers, who elect a town council and make what decisions are necessary save one, which is always made for them by ancient law: to give the town’s de jure rulers whatever they demand in taxes each autumn. These de jure rulers are the Nineyear family, an extended clan of cloud giants who own Joyous Garde and all the land lying around it. Their tax demands vary at their whim, for they have genuine need of nothing which the town can offer, and the Nineyear family delight in abusing their privileges in malign and unpredictable ways. One year they may demand a virgin girl to burn alive and devour; the next they might require the entire contents of the warehouses of all the members of the brewer’s guild; the one after that they could simply ask for a bonnet each of strawberries - so as to make the population of the town anxious to find out what the demand is to be the following year when ‘the other shoe falls’.' 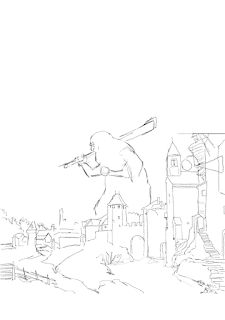 Killers' Way - 'Imperial rule in the Great North found it expedient to deploy assassins to help achieve its ends. These were trained almost from birth, and divided into groups by specialism - strangling, poisoning, stabbing, and so on. What begins in necessity ends in ritual: over the centuries these groups evolved into formal religious cults, devoted not only to the Emperor but also to murder itself as a holy act, and believing purposeless killing to be the ultimate celebration of the triumph of the uncaring cosmos over man’s petty goals and desires. Their religiosity enabled them to survive whatever precipitated the collapse of the Empire, and thereafter they roamed the region where the Dark River meets the Great North Road, further refining their arts and the application of them, preying at random on the populace.
It took the Lady to unify them and to found what became the town of Killers’ Way. Nobody knows to which cult she belonged, and it has become important subsequently for her origins to remain mysterious; but what is known is that she was a prominent, skilled assassin, well-versed in her technique and devoted like no other to the cause of empty and premature death. Yet she herself became the target of rivals, and was murdered by them - only to come back from the dead a month later with a revolutionary message. This was that it is possible to cheat the cosmos and defeat death through will alone, and in doing so to return fully alive rather than in the empty parody of life that is undeath. She brought the different cults together with this tale of hope, and created with them a settlement which grew gradually into a burgh....' 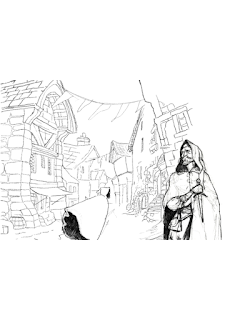 Nature Spirit - 'The land itself is capable of feeling: of mourning, of yearning, of hating, of loving, of hoping. Anyone who has walked in a forest in spring as green life appears to instantiate itself from the very air around it, stood on a hilltop as the winds of autumn blow in wild, or strolled along a desolate and mournful beach in winter, will be unable to dispute this. Usually, these feelings are expressed only in the minds and hearts of those who are present to observe them. Sometimes, however, the land makes its emotions tangible in much more direct form, creating a spirit of great power to walk the earth and give voice to what made it. ' 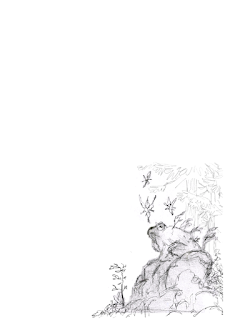 Ogres - 'The man-eating sons of Orcus, the Punisher of Lies, who have been in these lands since they came from abroad as mercenaries in the Emperor’s pay long ago. His rule bound them, but in his absence they have reverted to their old faith. Their deity demands of them that they kill and devour all oath-breakers, and since that word can describe all human life, any man, woman or child may be made their victim. ' 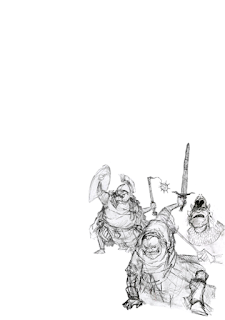 Pwca - 'A race of shapeshifters who may be helpful or cruel depending on the day, location of the moon, temperature, direction of the wind, and so forth - but may be more likely to be benevolent if given a gift which is a genuine sacrifice. One can transform into a hare, stag, horse, dog, goat, boar or bear, at will: the animal always has jet black fur. Otherwise pwcas appear as humans, but each with one discrepancy, such as a dog’s tail, a hare’s ears, a horse’s hooves, etc.' 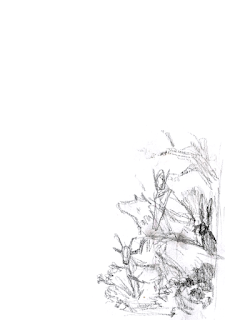 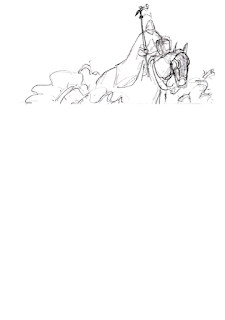 Recaps and Reivers - 'A wizened, miserly and hateful old man, powerful in magic, invincible in the belief in his own greatness, and given to acts of extreme sadism visited on his unfortunate captives. Each wears a cap that he soaks in blood, and carries a long pikestaff; if either of these implements are lost, the redcap loses his power and shrivels into a frail and pathetic figure who can only beg for forgiveness of his sins....' / 'The wild, free horse-men of the hills, unconquered centaurs, who live for honour, pride and glory and the visiting of misery and fear upon those they deem weaker than themselves - which is anyone not of their clan. They range far and wide across the Great North from their desolate hills, coming back blood-smeared and flame-scorched with wives, slaves, and plunder....' 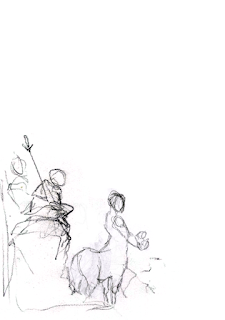 Email ThisBlogThis!Share to TwitterShare to FacebookShare to Pinterest
Labels: the meeting of the waters