A slug is as evolved as you.

I'm not much of an artist. The pictures I draw range in quality from the dreadful and horrendous to the merely crap. I like it though, which I suppose is what counts.

Last night I had a go at freehand sketching for the first time in what must be at least a year. It began as an effort to freak out my wife, but as I got going I started to become more attached to the weird invertebrate people I came up with, and have started thinking about a D&D sourcebook for them. This is a broad sampling of about 15 bits of 'concept art' that I drew up in the space of an hour or so. You'll probably have to click on them and zoom in to see them clearly, because for some reason my scanner decided to save them as gargantuan .bmp files. Be forwarned: they are of course of a quality ranging from dreadful to crap.

1. This is an octupus man. (The Japanese at the top says takojin or takobito; I haven't decided which I like best.) I'm not sure why he's wearing a fez. I started out with the idea of a ghost (which you can probably tell from the face) but then went off in an unexpected direction. 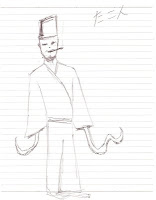 2. A cuttlefish person. I picture his body being a little like Jabba the Hutt, legless and vaguely phallic, but smooth and squid-like rather than Jabba's more snailly feel. Cuttlefish man has to inhabit a big tank of salt water if he ever needs to go on land - he has a gang of slaves to help him with this and carry him around. Maybe on a giant sedan chair, like a Slaad from Warhammer. (The Japanese says either ikajin or ikabito.) 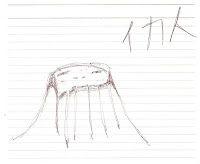 3. This is an old slug-man relaxing in his armchair at the social club. The item he's holding in his right tentacle is a pipe. Note the brandy, port and wine on the drinks table. Slug-people like a tipple. 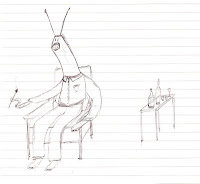 4. A slug-man warrior. The thing hanging from his waist is supposed to be a sort of sporran, rather than anything rude. It didn't come out very well. He has on ceremonial dress, including a cravat. 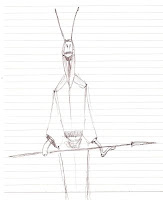