Son take a good look around... this is your hometown

"Liverpoole is one of the wonders of Britain... In a word, there is no town in England, London excepted, that can equal [it] for the fineness of the streets, and the beauty of the buildings." Daniel Defoe, A Tour through the Whole Island of Great Britain, 1721-26
"Liverpool…has become a wonder of the world. It is the New York of Europe, a world city rather than merely British provincial.” - Illustrated London News, 15th May 1886

"The scale and resilience of the buildings and people is amazing - it is a world city, far more so than London and Manchester. It doesn't feel like anywhere else in Lancashire: comparisons always end up overseas - Dublin, or Boston, or Hamburg." - Ian Nairn, Britain's Changing Towns, 1967 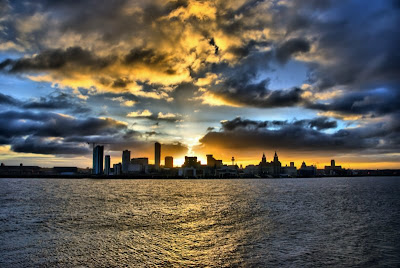 I do love a campaign that's set in a real-life city, particularly one in which the players, or at least the DM, have lived. A sense of place is what's missing from a lot of games (especially fantasy ones for obvious reasons), but by setting events in a real city that problem is eliminated at a stroke. Suddenly the campaign feels infinitely more tangible. I ran a Cyberpunk 2020 game for a year that was set in Yokohama, and it was a very rewarding and fulfilling experience because everybody involved knew the city intimately - its nooks and crannies, its hot spots, its no-go areas. And when I was a teenager our group ran a Shadowrun game set in Wallasey, our home town; one of my most vivid gaming memories was a duel between my shark shaman and a vampire in the car park of a pub just down the road from my parents' house, which ended with my character severing the vampire's head.

I've always wanted to set a game in Liverpool, which is the city I generally say I'm from (because I was born there, and it is right next door to Wallasey....and it's also cooler and more famous). It would be a great place to set a campaign: poor and rich in equal measure, with a baroque history, glorious architecture, a long tradition of sectarianism and a fascinating international past.

40% of all the world's trade once passed through Liverpool's docks, and yet some of its postal districts are now the most deprived in Europe. Its riches were built on the misery and suffering of the Atlantic slave trade, but its population boomed due to famine and plague in Ireland. It has the oldest black and Chinese communities in Britain and the country's oldest Mosque, as well as its best established Jewish population outside of London. It is situated in England but its heart and soul are Celtic - well over half the people living there have their roots in Ireland, Wales or the Isle of Man. It is the kind of place that can give birth to The Beatles but where Herman Melville, Nathaniel Hawthorne, Daniel Defoe, Charles Dickens and Washington Irving also called home. It has the most galleries and museums than any British city outside of London and the absolute highest per capita in the country. It has two mighty cathedrals, one Catholic and one Protestant, a UNESCO world heritage site, and some of the finest public architecture in the world. Yet ten minutes away from the city centre you will find sweeps of empty space where houses once stood, still waiting for regeneration since the air raids of World War II.

The game which would best fit Liverpool is, I think, Unknown Armies. British cities are made for secret cabals of cultists, of course - their narrow cobbled streets and dark alleys ooze clandestine scheming. But Liverpool in particular has the kind of history which generates plot hooks by the bucket load for that sort of dark urban fantasy: vast wealth and great secrets collected from all four corners of the world, sectarian violence between Protestant and Catholic, massive empty and echoing libraries and public fora, ghosts of drowned slaves, rows of deserted terraced houses, relics of postindustrial depopulation and urban decay. Violence and seediness too, like only a great port city can have. The place is like a huge sump of potential skullduggery and weirdness.

One day, my friends, one day. I really will get a Liverpool campaign off the ground.