Following on from yesterday's post, and drawing from ckutalik's interesting sequence on Top Secret and network linkages from earlier this year, I did some thinking last night on how to come up with a conceptual hexmap for non-geographical sandbox play. This post is just a summary of my preliminary thoughts - it's basically some rough ideas.

What I want, and what I envisage, is a hexmap revolving around interpersonal space rather than physical space. Instead of the players exploring a geographical area hex by hex, with encounters and events taking place as they go, in the Relationship Hexmap they explore a network of interpersonal relationships instead.

The key to this, as I see it, is that it has to retain the elements of what makes a hexmap work when you're using it for a D&D-esque sandbox. It has to be loose, it has to allow for random events, and (crucially) the GM shouldn't have any preconceptions about what will happen.

This last point is probably the most important. What I like about a fantasy sandbox is that, although the DM has set up the basic framework and scattered the thing with interesting locales, it's as much a voyage of discovery for him as it is for the players. This means that, although there needs to be some pre-existing information on the contents of each hex, it should be as vague and nebulous as possible until the players discover it.

Maybe it's best to give a physical example of what I'm talking about. Here is a small relationship hexmap that I came up with this morning when I should have been working. (Something about drawing it using paint's "crayon" feature appeals to the inner child in me.) 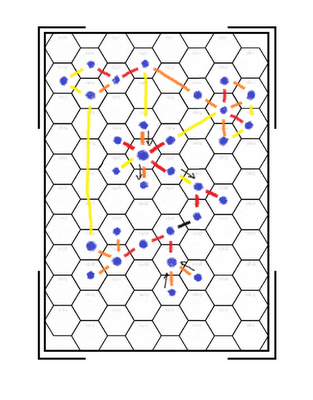 First off, an explanation of what all the pretty colours mean:


So how does all this work in actual play? The answer is that I'm not sure yet, but my basic thoughts on how it might break down are as follows:

I imagine it working especially well for investigative play - for instance, if the player characters are police, engaged in corporate espionage, that sort of thing. This is fitting, since I cribbed a lot of the ideas from ckutalik, who in turn cribbed ideas from Top Secret.

Anyway, more on this to follow as I ruminate some more.
Posted by noisms at 21:29