Last year my main resolution regarding the blog was to do something more creative with it, as I'd felt it had turned into basically a forum for pointless rants. Like most resolutions it didn't last beyond January (although I notice I did post about it as late as April). Let's resurrect it.

The project I was working on was called New Troy, and you can find the original posts here. It's like a cross between the Lyonesse books, The Wizard Knight, The Matter of Britain, The Ill-Made Knight, The Chronicles of Narnia, the tale of Urashima Taro, and work of that nature. To summarise:

The working title for the new campaign setting is New Troy. This is purely because I've always liked the completely made-up notion from the Middle Ages that Britain was founded by refugees from the fall of Troy. This is a reality in which that, or something like it, happened. But it was long ago, and nobody really knows much about it at all - or what Troy is or was.

In New Troy, there are two other worlds, called Faerie and Muspel. (There is a third, called Elysium, but it remains inaccessible except to the dead.) Faerie is the realm of elves, changelings, and other beings that are by turns capricious, curious, benevolent or cruel. There, time moves more quickly than it does in New Troy, and nothing is ever quite what it seems.

Muspel is the underworld, the realm of evil spirits, giants, and devils. Sometimes it is like fire; other times like ice. There, time moves more slowly than it does in New Troy, and everything is what it seems: malevolent and depraved. But also full of treasure.

There are times, and places, where the boundaries between New Troy and the world of Faerie and the world of Muspel become blurred. For Faerie, these tend to be ever-shifting: a gate may exist on a certain hilltop for a hundred years before suddenly moving elsewhere or closing, while another may be found behind a waterfall for one day every decade. For Muspel, they tend to be fixed, eternal: caves, chasms, natural arches.

Faerie and Muspel are where adventure happens in New Troy. Muspel is the mythic underworld [while] Faerie is the mythic otherworld, the wilderness equivalent to the megadungeon. A world of trees, hills, rivers and rain, but where the normal laws of reality do not apply, and are bent, warped or broken. It may even be more dangerous than Muspel, because it resembles the real world so closely that you may not even realise you are in it. But it is not the real world: There are other things there.


There are three core mechanical conceits:

1) Geography. New Troy, Faerie and Muspel all use reflections/refractions of the same map, because they are reflections or refractions of each other. So New Troy has its own 1-mile hex map. Faerie has a reflection of it, where geographical features are mirrored, although different, and the hexes are somehow 6 miles. Muspel is simply a megadungeon whose geography is measured in yards, but in a way which represents the geography of New Troy and Faerie.

2) Time. Time moves much more quickly, though randomly, in New Troy: just as you go through the wardrobe and spend what seems like years in Narnia only to return minutes later, the same could end up happening to PCs venturing into Faerie. The mechanism for this is to divide time spent in Faerie by d100, which explodes downwards to d1000, d10000, and so on, to discover how long passes in New Troy while the PCs are away. In Muspel, the opposite is true: time spent there is multiplied by d100. There is a Series of Unfortunate Events table while the PCs roll on to discover what happened while they were in the underworld.

3) Seasons. Seasons matter, both in Faerie and Muspel. In Faerie, each season means different animals, different faerie beings, and so forth - all acting in different ways. The way things work in summer is markedly different to how it works in winter. Moreover, there is no way to predict what season it is in Faerie based on what season it is in New Troy, because time is different. In Muspel, on the other hand, the character of the dungeon changes according to what the season is in New Troy: in winter the underworld is one of ice; in summer it is one of fire; in spring and autumn, it is a little of both.

I'll be going into some more detail on this in coming posts. I may flake on this commitment, but you're used to that. 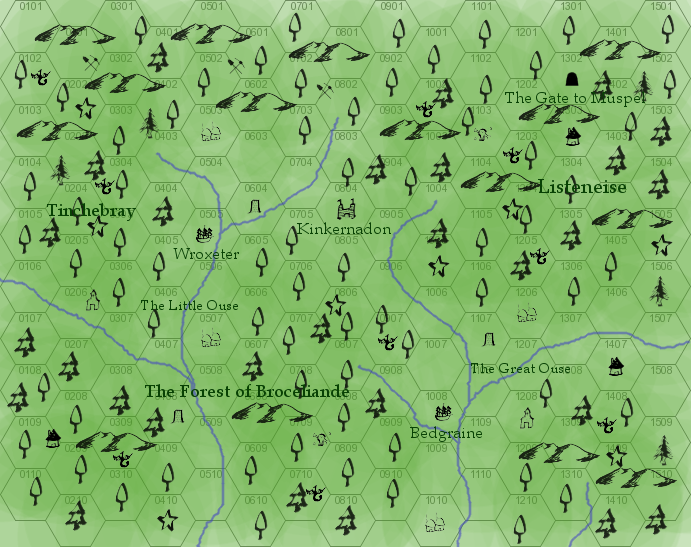