Sons and Daughters of Muspel 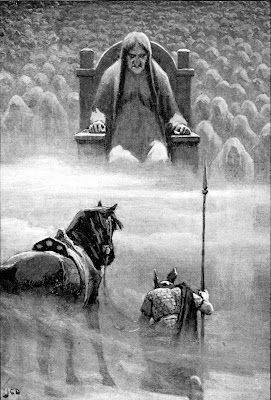 Muspel is home to an infinite variety of malevolent spirits. Here are some.

Eldjotnar, The fire giants of legend, rulers of Muspel in summer. Their flesh is black like coal, their hair red, and their temperament violent. They exude heat, and their aim is to create a fire so large in the bowels of the world that it will wreak its final destruction. HD 15, AC 0, #ATT 1, DMG 2d10+10, Move 180. Spell-like abilities: Eldjotnar never suffer any damage from fire or heat-based attacks. They cause 1d6 damage per round through their body heat to anybody within a 10' radius.

Hrimthursar. The frost giants who wrest control of Muspel from the Eldjotnar in winter. Their flesh is white, their hair pale blue, and their temperament as cold as their nature suggests. They exude cold, and their aim is to bring glacial ice rolling up from beneath the surface of the world to cover all creation. HD 15, AC 0, #ATT 1, DMG 210+10, Move 180. Hrimthursar never suffer any damage from ice or cold-based attacks. They cause 1d6 damage per round through the cold they exude to anybody within a 10' radius.

Niflungar. Diminutive humanoid creatures who dwell in the misty places of the underworld and are at their strongest during autumn and winter. They hoard treasures in the darkness and are avaricious and grasping. HD 1 (1+1 in autumn; 2 in winter), AC 6, #ATT 1, DMG d6, Move 120. Spell like abilities: Pass without Trace 3/day, Wall of Fog 3/day (treat the size of the fog as 4 yards cubed; niflungar can cooperate to create fog of exponentially increasing size, i.e. 8 yards cubed by two niflungar, 16 yards cubed by 3 niflungar, etc.).

Rjufendr. Clawed creatures who exist to tear flesh asunder. One swipe of a forearm can slice a man open from nape to chops. HD 1 (1+1 in spring; 2 in summer) AC 6, #ATT 1, DMG Special, Move 150. When a rjufendr successfully 'hits' in combat, it does d6 damage; if the score is 5 or 6, the target must roll to save vs. death. Failure means instant death; success means a limb is lost (roll a d4 to determine) and the target is automatically reduced to 0 hit points and unconsciousness.

Fenrir's Brood. The lupine spawn of the god of wolves. Black, snarling, canine brutes with grasping human fingers and warped hunched spines. HD 1+1, AC 7, #ATT 1, DMG 1d6 (bite) or as weapon, Move 150. Spell like abilities: Can go Berserk 1/day, gaining an extra attack for the next 3 rounds but falling unconscious straight after.

Landvaettir. The spirits of the wicked or feckless dead; pathetic cloaked ethereal figures who are bent to the will of whichever powers of Muspel may desire to control them. HD 1, AC 8, #ATT 1, DMG as weapon, Move 120. Spell like abilities: Can touch to Bestow Curse 1/day. Harmed only by silver or magical weapons.

Gullinbursti's Brood. Golden-maned descendants of a boar demigod who was forged from fire. They appear as large tusked boar-headed men or women who glow with radiant yellow. HD 3+1, AC 5, #ATT 2, DMG as weapon +2, Move 120. Spell like abilities: Constantly case Continual Light and can channel their light into an attack akin to a Colour Spray 1/day,

Marmennill and Margygur. Loathsome half-fish people who live in the pitch-dark lakes of the underworld and have lost their sight accordingly. They can foresee the future (as an augury spell with no time restrictions) and will use this power in return for: 1 - A certain item on that level of Muspel; 2 - Sacrifice of a treasure worth 200 gp or more; 3 - Sacrifice of a life. HD 1+1, AC 7, #ATT 1, DMG as weapon (usually spear), Move (Sw) 150. Spell like abilities: Augury 3/day, Detect Invisibility at will, Fish Summoning I 1/week.

Lindworm. Wingless, bipedal, serpentine dragons which live in the depths of the underworld and serve whichever giants are its rulers - shifting their allegiance as swiftly and easily as the wind changes direction. Their bites and breath are the vilest poison, and they love trickery. HD 6+6, AC 3, #ATT 1, DMG 1d8+2/poison, Move 150. Spell like abilities: Stinking Cloud 1/day, Suggestion 1/day, Fools Gold 1/week, Ventriloquism 3/day, Audible Glamer 1/day, Putrefy Food and Drink at will. Their bite kills automatically on a failed save vs. death; success limits the effect to that of a Ray of Enfeeblement.

Audumbla's Drool. Beings created from the spoor of the cattle demigod. Horned, twisted, semisolid yearners for souls of their own. HD 1, AC 7, #ATT 1, DMG 1d6, Move 120. Suffer no damage from bludgeoning weapons, and only 1 hp damage from piercing weapons. Can steal the soul from a body if it remains in physical contact for 6 rounds; the body becomes a lifeless husk and the soul becomes the drool-being's possession.
Posted by noisms at 01:17