I Wish I Did Not Know About "Steven Universe", or the Place Where Nerds and Sport Collide

Because I created a 'zine called "The Peridot", I set up a Google alert in order to get notifications if anything is talking about it. The overwhelming, overwhelming majority of the notifications I get are not about the 'zine, nor about peridots as in the semi-precious gem (as you might reasonably expect)....no, they are about something called "Steven Universe", which apparently has a character in it called The Peridot. You can read about it here, if you are interested. I had no idea this thing existed prior to setting up the Google alert; I have never watched it - so it is arguably unfair of me to dismiss it out of hand - but I am going to go out on a limb and say that I am completely justified in doing so.

But ho hum. This blog entry is not (solely) about me taking a dim view of some cartoon series which has no effect on my life whatsoever beside the occasional irksome email in my gmail inbox. No - this blog entry is about this story, which came with today's Google alert: http://christiandaily.com/article/steven-universe-season-4-news-storyboard-artist-leaves-social-media-after-being-harassed-by-fans/55485.htm. Yes, that's right: somebody connected with the show (which is, let's be clear, supposed to be a programme for children) has been harassed off Twitter by grown men and women (though I use that term loosely) simply because of what has happened in it. Viz:

Lauren Zuke, one of the storyboard artists and writers for "Steven Universe" decided to leave Twitter and delete her account after she experienced harassment from fans of the series who accused her of queer baiting.

Queer baiting is a term used to describe what LGBT fans perceive to be a media creator's attempt at wooing LGBT fans with no clear intention of showing a consummated LGBT relationship on television. A thread on Reddit reveals that a group of aggressive "Steven Universe" fans supporting the Peridot–Amethyst pairing (otherwise known as "Amedot") in the series believed themselves queer baited after the "Summer of Steven" episode "Beta" aired showing Peridot moving in and doing well with Lapis Lazuli, a newly converted Crystal Gem.

Zuke had shared art supporting a hinted romantic relationship between Lapis and Peridot (otherwise known as "Lapidot" to some) after the episode aired. This angered "Amedot" fans, believing that not only was Zuke queer baiting them but that the artist was favoring one ship over the other.


You see this sort of thing a lot, of course - it isn't really news, as Leslie Jones will tell you - but for some reason this instance of the phenomenon (I suppose "twitter mob idiocy" is the correct term?) particularly makes me wonder whether we are living in a sort of Last Days of Rome era, with the Visigoths and Huns waiting for us just round the corner with clubs. I mean, really. Let's count the layers of sheer awfulness here:

What is it about modern fandom that makes it so shrill and hateful? Is it simply not having enough going on in your own life that you have to invest your emotional energy in fiction? A lack of perspective brought on by lack of human contact?

Those seem too simplistic. What I've noticed about episodes like this is that they are basically nerd-dom's answer to the way in which football (that's "soccer" if you're reading across the Pond) fans behave. At the average football match it is perfectly normal to be surrounded by grown men and women who feel that it is not just acceptable but their right to hurl barbaric abuse at referees and linesmen, call opposition managers pedophiles, make threats of violence, and otherwise behave like a sort of unholy combination of a 13 year old boy and a gibbon in heat. It's all part of the pantomime of the experience, of course, and mostly harmless, but it seems to come from the same place that online abuse of actors or writers does. In the same way that fans of Steven Universe want the plot and characters to reflect what they want, and become aggravated and lose all sense of proportion when that doesn't happen, football fans want their manager and players to do exactly what they feel that they should be doing, and turn into shit-flinging chimps when they don't.

I don't feel enough of a qualified social anthropologist to explain this phenomenon in words, so I will summarize my argument with the following handy diagram, which I recommend you study in detail: 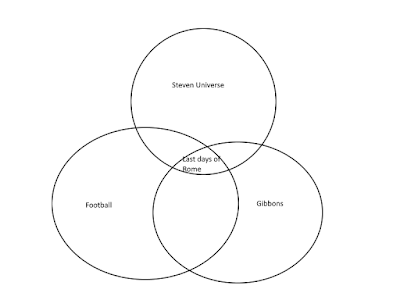