Selling Mezcal to Merrow: Oenophiles in the Fixed World

Earlier this year I was posting a bit about something I was calling "the Fixed World" for want of a better name. The main post you need to read is probably this one. Yesterday's post got me thinking about The Fixed World again. Specifically, how to run an oenophile campaign in it.

Take a look at the map with major alcohol-producing regions marked on it, 1-15. In most areas humans are not the dominant species, but eke out a living - either as slaves or at the sufferance of the creatures which live nearby. 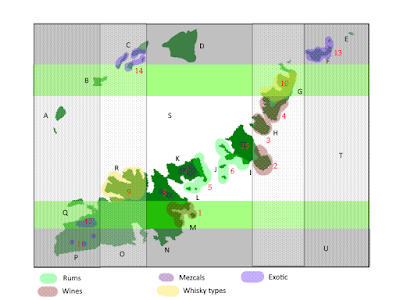 The colours are are a bit off in places because I was fiddling around with the opacity of the layers, but hopefully it's clear.

Areas 1-4 are the major wine-producing regions. These are areas that are warm-ish and get decent amounts of sun, but not cripplingly hot or humid.

Area 1 is in an area where it is always autumn and always daytime. This is good wine weather - warmish with plenty of sun and sometimes wet, but not too hot. It is also the major area of human habitation. The human polities here are like those of Central Europe or the North East of the Asia-Pacific Rim.

In Area 2 it is always evening, and always summer. Warm weather prevails here, and there is also lots of sun for plant life to flourish. I imagine it as Mediterranean in character - pseudo-Italian city-states, perhaps. Or Levantine. Or both.

In Area 3 it is likewise always evening, and always summer. In the notes for the setting, 'H' is described as being populated by Tabaxi and lizardman tribes. I am thinking of a society with a caste structure - a Tabaxi civilization with lizardmen fighters and human underlings. The humans produce wine for trade with other societies.

In Area 4, another region where it is always evening and always summer, is a region ruled by what I described as "Su-monster psionicistocracies". Perhaps su-monsters, being fairly closely related to humans, are able to feel the effects of alcohol, and treat it as a blessed relief from the curse of psionic awareness?


Next we come to the major rum-producing regions. These are the areas which are always summer, and always day-time: hot, humid and sunny all the time (except for rainstorms) and excellent for sugar cane.

Area 5 is ruled by "Harpy Queendoms". But there are also lots of tiny human groups living around the coast, too - something like the ancient Greek city-states, or the pre-Columbian Caribbean. They are specialists in the production of rum, for which they are greatly admired.

Area 6 is an archipelago ruled by Rakshasa. Naturally their human slaves produce sugar and rum. Rakshasa do not feel the effects of alcohol but are connoisseurs of the flavour.


After the rums are the areas specializing in mezcal and similar. Hot dry zones where it is always summer and always daytime, where there are lots of cacti.

Area 7 and 8 are vast savannahs and semi-deserts roamed by dinosaurs who are domesticated in Gith sultanates. The Gith drink extremely strong mezcal and tequila brewed from many varieties of spiny cactus.

Area 15 is the centre of a continent where "plants grow to huge sizes - skyscraper-sized trees; grass the size of trees in our world - and the mighty forests throng with giant insects, grippli, tasloi, bullywugs and the like." In the middle is a great plain where the grass is as tall as trees and there are special cactuses as high as towers. People travel from the human polities around Area 2 on arduous and dangerous journeys to harvest their nectar to use in extremely rare and expensive mezcal brews.


Next we come to the whiskys and similar - Areas 9 and 10, which are temperate, bordering on cool.

Area 9 is where it is always dawn and always summer. This makes it misty and foggy - a land of fog giants, mist dragons, ettercaps and so on. The fog giants, of course, make whisky, in huge stills.

Area 10 is where it is always autumn and dusk. It is chilly but not freezing; dim but not dark. It is a mountainous land ruled by dragons and aarakocra, but there are valleys and islands where human habitation is possible. In bleak dwellings, to make their miserable lives just a little brighter, the people distill whisky. This is Scotland, basically.


And finally, we come to the exotics - liquors which are not brewed on our own dear Earth, which are found in Areas 11-14.

Area 11 is always winter and always night. It is inhabited by little except xorn, xaren, hook horrors and the occasional lich. But there are some archmages, sorcerers, and mystical cults where people brew strange alcoholic beverages from the bacterial growths under the rock, which live off minerals and salts. (These drinks are probably described as having great "minerality". You get that one for free, wine buffs.)

Area 12 is always night and always spring. It is dark, but warm enough for there to be fungus, which are harvested in the underdark by Sverfneblin. If anybody can dodge all the quaggoths, grimlocks and troglodytes who live on the surface, they may discover fascinating new taste sensations among the fungus liquors of the deep gnomes.

Area 13 is always winter and always night. Under the surface live derro; above ground are deadly puddings and oozes, often lying dormant for centuries until a meal passes by. The derro surely distill alcoholic drinks of some description - they are dwarves after all. Maybe from the blood of their slaves?

Finally, Area 14 is an archipelago where in the South it is always winter and dawn. Merrow rule the pack ice around it, and paleosiberian-type tribes live on the land, with stone giant overlords. They create liquors from the lichens and molds which cluster the rocks.