The Mystery of Ideas

A big part of being a DM or of writing gaming materials is simply sitting down, staring at a blank sheet of paper or screen, and trying to think of an idea. Sometimes the ideas just flow and you enter a kind of creative fugue state in which time seems to both stand still and yet pass with bewildering speed.

But at other times you simply cannot think of anything. It is like trying to tug free a zip which has caught. You struggle inanely. You are trying your very hardest, but you are making absolutely no discernible progress.

Take a look at this sketch map of a section of a dungeon I have been working on. 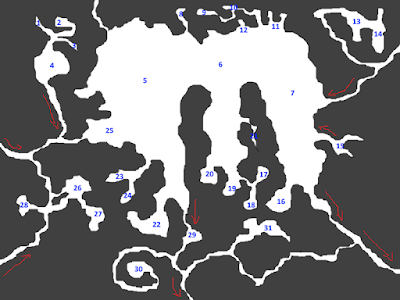 I spent this morning briefly jotting down the contents of the 31 rooms. I whipped through most of it in a breezy fashion, taking at most 20 minutes and barely even thinking at all, but then I got to areas 26, 27, and 28, and got completely stuck. I sat for at least half an hour transfixed - I did nothing at all except look at that area of the map, rub my temples, and try to summon something up. Eventually I did manage to get something down, but it still seems half-arsed to me: a repetitive by-the-numbers encounter with a boring monster which I will have to totally revamp for the final version.

It is almost as though actually thinking up ideas is hardest when you are trying to think of them. If you simply go for a stroll and let your brain act as a kind of cosmic sieve (I like to imagine the brain in such circumstances as being a bit like one of those neutrino detectors buried underground, simply passively letting background radiation wash through it and occasionally going "Oh, there's a neutrino. Oh, there's another one") then in no time at all you'll have more ideas than you know what to do with; you will have a hundred and have forgotten fifty by the time you get home. But if you sit down in front of a computer and tell yourself: "Think of an idea!" you freeze like a rabbit confronted by a stoat.

Ideas, then, are also a bit like eye floaters - those little blobs which float around on your eyeball and which you can often see around the periphery of your vision when you aren't really concentrating on anything. Try to focus on them and they dance out of view. But look away and it's almost like they dominate your vision.
Posted by noisms at 02:01