The Allure of the Apocalypse

I've just finished a bit of light Christmas reading - John Carey's The Intellectuals and the Masses: Pride and Prejudice Among the Literary Intelligentsia, 1880-1939. Despite the intimidating title, it turns out to be an amusing, sometimes even laugh-out-loud funny read, but also rather blithe and superficial. Carey's thesis is simply stated. It is that the modernists (DH Lawrence, Ezra Pound, TS Eliot, Virginia Woolf, Wyndham Lewis, Jean Rhys, EM Forster, etc.), were almost all dreadful snobs who often entertained fantasies of genocide perpetrated against 'the masses' - and that Hitler's own such fantasies stemmed from a similar kind of snobbery. And, naturally, Nietzsche was to blame. The book is mostly a gleeful collection of quotes cherry-picked for evidence in support of this (deliberately) provocative idea.

The book is vicious and lacking in generosity. Yes, undoubtedly many of the people Carey skewers were elitists and said silly things in the course of their lives (who hasn't?). But as this goes on, chapter after chapter, one increasingly begins to feel some sympathy for those, like Wells, Lawrence, or Eliot, who worried about the ecological devastation that would follow from overpopulation and economic development, and the corrosive effects of mass consumerism on the culture. Those worries were often expressed in sweeping and over-exaggerated (not to mention ridiculous and sometimes disgusting) ways, but it is hardly absurd to have had them at all. Moreover, I think there is something entirely normal, maybe even natural, about entertaining fantasies of being able to escape from 'the mass' and have the world to oneself. Who hasn't, at times, thought fleetingly about how great it would be if there were no, or very few, other people in the world? (Except perhaps a few attractive and promiscuous specimens of the sex of your choice.) Who hasn't occasionally in an idle moment been struck that it would be wondrous if one could experience, if only for an afternoon, a world after people?

There is nothing wrong with that thought - it doesn't make you an incipient Nazi or psychopath. It is the inevitable, occasional flight of fancy of an individual member of a social species living in conditions of hypersociality in which it can be difficult to feel as though one is important and distinct, combined with an undoubted yearning which each of us feels - some more than others - for connection with a natural world from which we are increasingly alienated.

An apocalypse would be dreadful. But there are moments when it has its allure. I was struck by this thought earlier today while walking with a friend and fellow blogger on a local tidal island. Windswept, desolate, silent of traffic noise, it was easy to imagine the feeling of being alone in such a place in the aftermath of a war or plague. Just you and the grass, the beach, the sea, the golden sunlight streaming through the clouds onto the hills in the distance - and a few cormorants, oystercatchers and a stray heron minding their own business nearby. Bliss. No, I wouldn't like to live on Gamma World. But it might be nice to visit for a day. 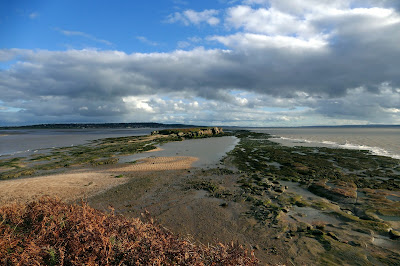