Of Sparse and Dying Earths

There is a spectrum of sparseness for fantasy and SF worlds. 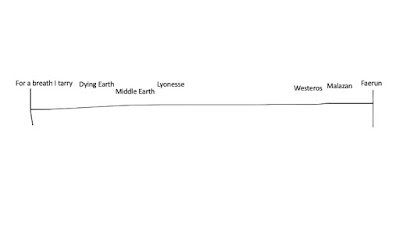 On the left hand side is 'For a Breath I Tarry', the Zelazny short story in which an entire planet is populated by two robots. On the right hand side are the high fantasy worlds of D&D and modern commercial fantasy fiction, which are crowded and thronging with life. Some other examples off the top of my head, going roughly from left to right: Viriconium, Hyborian earth, Urth, Bas-Lag, Mystara.

An observation: as the genre has matured, its settings seem to have tended more towards the dense than the sparse. The big commercial fantasy worlds nowadays are often filled with peoples, cultures, complex societies and economies. (Think A Song of Ice and Fire - there is a lot going on in that world, isn't there? An awful lot of Sers and Houses and people being murdered in novel ways or shagging their sisters.) Those of long ago seem comparatively empty. (At times you almost feel as though Tolkien knows the names of literally everybody living in Middle Earth.) Is this perhaps to do with the influence of D&D and other fantasy RPGs, and the explosion of interest in world-building and monster creation which followed? Indeed, is there a 'structural bias' in D&D towards the dense setting, because of the assumption that there is a large pool of low-level murder hoboes roaming the land, and an infrastructure to support them?

Another: not wanting to start a politics flame war, but is there a tendency for conservative writers to more readily embrace the sparse setting? A sparse setting is one which is in decline (Middle Earth, Lyonesse), or dying (Urth); a dense one is developing, optimistic, fresh. A sparse setting is one which a rugged individual can make his (or her) own; a dense one is one which leads more naturally to stories of intrigue, politicking, sociality. I've often thought that Jack Vance's old school libertarianism manifested itself most strongly in the geography of his settings, which are big, open, and often so empty of people that there is almost nothing to constrain the ambition or freedom of his heroes.

A third: this may seem a banal point, but dense settings naturally lend themselves to nerdish pursuits and 'geeking out', because there is just so much more stuff to learn about, to memorise, to know. Middle Earth is perhaps an exception here, because its history is so detailed (and also because after the Peter Jackson films there was an explosion of spin-offs), but generally speaking older, sparser settings are easily summarised and understood, and neither require nor inspire much in the way of homework.

I feel the attractions of both types of setting. I love the sheer exuberance of a Mystara or a Bas-Lag. But I feel the pull of the near-empty sword and sorcery world, in which every single NPC is larger than life, special, rare, dangerous. One does not need to restrict oneself to beer or wine for all eternity.