Anything Works If It's Consistent 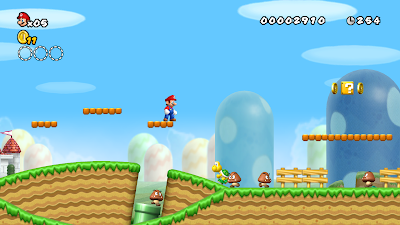 If you want to move away from Tolkien-esque tropes and create a fantasy setting which lasts, almost anything works as long as it's consistent. I was thinking about this over the weekend while playing Super Mario Bros. Wii (I am behind the times). You can't get further away from Tolkien than the world of Mario. But it is a consistent fantastical milieu nonetheless.

This is achieved through having a selection of core themes or tropes which are ruthlessly and endlessly exploited and repeated. Mario can navigate by moving through pipes. He eats mushrooms which give him special powers. He is aided by mushroom people and a friendly dinosaur. He is confronted by hostile fire-breathing plants, tortoises, evil mushrooms and ghosts. By and large, this collection of things - the furniture of the Mario franchise, so to speak - appears in every single iteration with a few bells and whistles added. You know where you are with it. And in its own way the Mario universe is just as much a fantastical world - a legendarium or sub-creation, if you will - as Tolkien's Middle Earth. There is more to Middle Earth. But the Mario universe presents the player with something which feels coherent in the same way that Tolkien's novels present a coherent milieu to his reader - despite the fact that the Mario universe is absurdist and apparently based on free association rather than careful thought (though not, as some might argue, a piece of surrealist art).

In creating a long-lasting, interesting and innovative fantasy setting, then, I think the most important thing may well simply be to come up with, say, a dozen or so ideas, themes or tropes and make sure they appear consistently. What those ideas, themes or tropes are is probably of secondary importance to their repetitive use.
Posted by noisms at 04:21