Monsters in the Dreaming 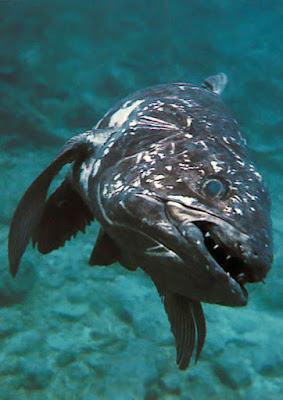 I've posted before about Dreams Beneath the Ice, one of the memory realms (read: megadungeon layers) in Behind Gently Smiling Jaws. The conceit is that, as a young adult, the crocodile explored the world's oceans before burrowing beneath the earth on an island somewhere and hibernating through an ice age. While sleeping, it had dreams of the things it had encountered, and the memories of those dreams still populate part of its mind.

The idea is that in the Dreams Beneath the Ice is a network of burrows, tunnels and caves beneath the earth, but the creatures that are encountered there are mostly sea beasts. They move through the air in the tunnels as though it is water.

Here are some samples.

Shoals of fish, like clouds, like tempests beneath the waves: silver flowing billowing broiling masses, each moving as one vast unmeasurable gaseous form. As the crocodile slumbered beneath the ice it dreamed of them: neither hostile nor benevolent, but as mystical and capricious and numinous as the weather. Now they roam the Dreams Beneath the Ice, coming and going as if borne by the wind.

The Eyes of the Deep

In the depths of the oceans dwell big slimy fish as old or older than the crocodile itself – as old as the eons, as old as time, as old as the seas in which they drift. They survive not through grim vigour like the crocodile, but through implacable and insurmountable stillness: allowing the water to carry them through benthic waters so as to expend only the faintest glimmer of energy, and pausing only when necessary to unhinge their jaws to swallow an unfortunate fish. The crocodile knows them well – ancient companions from its youth. It dreamed of their blithe, calm hunger and considered them sentinels, watchers, observers, passers-by: the eyes of the deep, ever present, witnessing and never partaking.

Appears as a large, thick-bodied, grey-blue mucus-covered fish with oversized bulbous staring eyes and a vast mouth. Floats slowly through the water, barely twitching its fins.

HD 7 AC 18 AB +7 ATT Swallow (does 3d6 damage and swallows if doing more than 10 hp; swallowed victims take 1d6 damage per round until death)
*Their eyes are orbs of mesmeric intensity, like infinitely deep blue undersea trenches viewed from above: eye contact (1 in 2 chance for any attacker – roll each round) results in paralysis for 1d3 rounds on a failed save vs magic.
*What the Eyes of the Deep see is communicated somehow to all the other native inhabitants of the realm, who now know where the PCs are.

Alien intelligences lived in the shallow rocky places under the coastal seas where the crocodile swam and hunted. Muscular invertebrate things moving amongst reefs, in and out of the dappled sunlight beneath kelp forests, between cracks and inside holes. Things with many searching dextrous arms, clever eyes, movements betraying thought and reason. The crocodile saw them, watched them, and knew them for what they were: intelligent hunters, perhaps more intelligent even than itself.

The alien intelligences appear as large, fluidly-moving octopodes with sharp slit-like eyes and many long arms which can extend around them for vast distances and which endlessly search for things to kill.

HD 5, AC 14, AB +5 ATT Special
*The alien intelligences have huge numbers of tentacles – an impossible amount for their body’s size, which is up to 10 feet in diameter. However many targets there may be, there are sufficient numbers of tentacles to entangle and bind them and pull them towards the central maw – a sucking sphinctral mouth with endless greed. An Intelligent Hunter attacks all enemies each round with a STR 16 entanglement which hits automatically; each round the enemies are pulled 10’ towards the maw and are instantly killed when they arrive at it.
*Attacking the tentacles will slice through them and result in one round of freedom on a successful hit doing 6 more more damage, but will not noticeably diminish their number or affect the health of the Intelligent Hunter.

Among the crocodile’s rivals in those early days were other reptilian beasts – gracile, sleek, with long muscular necks; true sea dwellers with paddle-like limbs and powerful tails to propel them through the warm seas. Sometimes it fought them. The crocodile was faster, stronger. The long-necked rivals were more flexible, more willing to hunt and fight in groups. The crocodile’s armour protected it. Its rivals bodies gave way under its jaws and tail.

In its dreams, though, they came at it still. Under, above, behind, to the side. Toothed jaws snatching, biting. Plunging at its body on the end of long snake-like necks. In its nightmares it saw them, and writhed and squirmed and wrenched itself away; the memories of those dreams plague it – an eternal struggle against foes which come from every angle and are never at peace.

Jellyfish. Clouds of tiny stinging globules. Floating lumps of translucent blue trailing stingers. Billowing, pulsating, throbbing mounds hanging in the deep. In the eye of the crocodile they were as much a part of its environment as kelp, as fish, as waves, as beaches. Eternal silent companions. Surroundings.

Its armoured skin too thick to be penetrated, and its speed and skill in the water too much to allow itself to be touched by stingers, to the crocodile these things were harmless. But it watched fish die in their unthinking toxic embrace. It knew that to the small or fragile their touch was death. It admired their potency. It knew that it was stronger. In the corridors of the memory of its dreams they float still – fellow travellers from its early life.

Throngs of tiny stingers. They float through the air to surround and sting. They fill a d3x10’ cube and sting automatically, causing weakness (1/4 STR) on a failed save vs poison; the effect lasts for the duration of that day. They do not have HD but can be avoided by moving past, running away, or through blasts of electricity or cold.

They float close to the ceiling like hideous helium balloons, trailing stingers which either kill or paralyse (save vs poison; success means weakness (see above)). Stingers are extremely thin and only spotted on a roll of 1 in 6, or if actively searched for.

Big, translucent, graceful symmetrical discs which shimmer with iridescence as they move through the air. Their stingers mean death.

HD 4, AC 12, ATT poison, #ENC 2d6
*Move in a random direction each turn (use scatter dice); they hit anything in their path automatically – the victims must save vs poison or die.
*Are slow and can be destroyed by fire or electric blasts.
Posted by noisms at 03:36