Behind Gently Smiling Jaws: Sample Dungeon Section - The Krill and the Basking Mouth

This is a sample of the sort of thing I'm working on for Behind Gently Smiling Jaws. BGSJ is a kit for making a megadungeon in a crocodile's mind. Each level has its own distinct character and contents; the first is called "Dreams Under the Ice", and the basic concept for the level is here.

Each level of the crocodile's memory has been invaded by one of the "Seven Who Went Before" - seven different adventurers who each entered the crocodile's mind in a previous age and manipulated things there, wittingly or otherwise, by creating false memories: everything from outside that gets brought into the crocodile's mind may then be subsequently "remembered" by the crocodile. Dreams Under the Ice was invaded by Sese-Mahuru-Bau, a native of Paradijs (mirror-universe New Guinea) who brought with him both items and memories from that place, and these are now intermingled with what the crocodile's true memories of its own dreams are.

So there are in effect three layers of phenomena interacting in the first megadungeon level: the crocodile's original dreams as it lay sleeping in a burrow in a glacier during an ice age; its memories of those dreams, attenuated by time and distance; and the alien items, concepts, emotions and creations which Sese-Mahuru-Bau has brought inside.

With me so far?

This is a small sector of Dreams Under the Ice. (Forgive the naffness of the map. Somebody with artistic talent will be doing it in reality.) 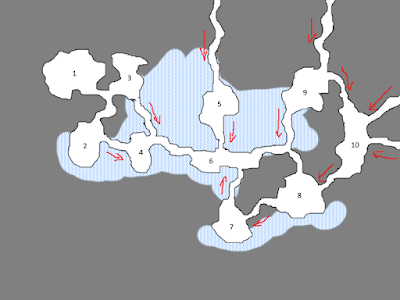 Grey indicates icy rock. Pale blue indicates glacial ice. The red arrows indicate slopes, with the arrow pointing downwards. In icy areas descenders of these slopes must save versus DEX or slip and fall to the bottom for 1d3 hit points of damage, unless aided by gear or some kind (whether rope, crampons, etc.). Ascent in icy areas is impossible unless aided by gear of some kind.

In chamber 1 of this sector there lies an idol that is a refracted false-memory produced by Sese-Mahuru-Bau’s presence in the crocodile’s mind. Its discovery will benefit the PCs considerably, but in order to find and make use of it they must avoid the obstacles of the two Krill Clouds and the Basking Mouth.

A softly chittering-clicking-circulating mass of tiny shrimp, no bigger than a man’s fingernail, which fills the air in these chambers like a fine mist - vague, amorphous, and vast. The crocodile swam through such krill clouds once, and later dreamed of that cloying suffocating feeling – as a man dreams, in a nightmare, of a cloud of flies or aphids at his eyes, nostrils, ears, mouth: forcing and wriggling and writhing their way inside him.

A Krill Cloud fills the air in whatever chamber it inhabits. The tiny shrimp force their way inside the eyes and all uncovered orifices, with predictable consequences: blindness, deafness, impossibility of speech (and hence spellcasting), and so on. The cloud cannot be harmed by physical attacks. If in a chamber containing a Krill Cloud, blinded PCs can grope for an exit tunnel in 1d6 rounds. If they can find some way of keeping the krill from their eyes, visibility remains reduced to 2’.

These effects are also felt by randomly encountered monsters, unless they do not have physical eyes, ears, and so on.

When the PCs arrive in room 5, 9 or 10, roll 2d10 to determine which chambers the two Krill Clouds are in (re-roll if scoring a double).

The mighty enemy of all of the krill clouds. A huge beast that represents a warped reflection of the crocodile’s memories of a basking shark: a vast open maw on the front of a black squamous finned thing resembling not so much a fish as some huge fat snake. In the crocodile’s dreams it was a great gaping monstrosity which needed only to open its mouth in order to suck in swarms of krill, fish, and indeed the very ocean itself: a kind of gulping bottomless pit into which all living things were poured wherever it swam. When the Basking Mouth appears, all flee.

When the Basking Mouth appears in a chamber, it sucks everything in it into its maw and swallows it – to disappear forever. Any living thing may resist by successfully rolling a STR check, but this provides only one round of free action – if the creature remains in the chamber for the next round no STR check is permitted and it is swallowed automatically. The Basking Mouth remains in a chamber until there is nothing left alive in it.

The Basking Mouth moves in a set pattern around this set of 10 chambers. When the PCs arrive in chamber 5, 9 or 10, roll a d10. The Basking Mouth is in whatever chamber is indicated (roll again if the result is the same as for the Krill Cloud). It then moves through the chambers in an ascending pattern of odd then even numbers (or vice versa). Thus, if it is initially in chamber 3, it then appears in chambers 5, 7, and 9, then 2, 4, 6, 8 and 10, and then to 1, 3, 5, and so on. If it is initially in chamber 4, it then appears in 8, 6, and 10, then 1, 3, 5, etc. It spends one entire round in a chamber if there is nothing in it. The Basking Mouth does not “move” between chambers, so it does not appear in the corridors between them. It simply manifests itself in each chamber in turn.

Anything that is not fixed in place will be sucked into the maw of the Basking Mouth when it passes. Where no description is given, the room is simply scoured clean. The rooms are all oddly smooth and completely free from dust, earth, etc.

1 – The Idol. Sese-Mahuru-Bau’s people worshipped many different jungle animal spirits. This is an idol of the tree kangaroo spirit. It is carved from wood and decorated with fern fronds and long red feathers arrayed behind it in a spray of incongruent colour. It is firmly planted into the icy rock beneath it.

In one paw the tree kangaroo holds a bark mask and in the other a flint knife. It has an open slot in its belly that is a stylised representation of a pouch. Its face has three clear lines cut into its cheeks on either side that are a stylised representation of whiskers. If somebody kneels before the idol and slices with the flint knife three lines into his or her own cheeks that mirror those on the tree kangaroo’s face (permanent -4 to CHA), the idol releases the mask. In order for the idol to release the flint knife, a young animal of any type must be placed inside its pouch.

The mask, when released, can be worn at any time. It allows the wearer to either disguise him- or herself as any human being he or she has seen, or lie with completely believability. The flint knife can be used as a weapon: it is exceptionally sharp and always does maximum damage.

2 – In the rocky area on the North wall is a manifestation of art from Sese-Mahuru-Bau’s memories. It is a bird of paradise with wide staring eyes, looking straight ahead, and a huge and florid tail spread around it. If anybody attempts to fire a missile weapon in the chamber, they find their attention unavoidably drawn to the mesmerizing eyes of this bird, and their attacks are directed towards it against their will. Painting an exact replica of the pattern on an item – for instance a shield – will result in enemies directing missile attacks fruitlessly against it.

5 – The walls in this chamber are comprised by a solid mass of trees, ferns, undergrowth, bushes – all petrified by, and partially encased within, shards of ancient blue ice which surround, penetrate, and explode out of them in crystalline arrays. A glaciated forest which constitutes a fragment of Sese-Mahuru-Bau’s memories of his homeland - driven into, and mutated by, the crocodile’s false perception of it. A segment of fantastical reminiscence which the crocodile somehow now imagines it dreamed of in the ancient days.

Some of the bushes and other plants produce berries – red, yellow, and green. Their effects are exaggerated by the vividness and nostalgia of Sese-Mahuru-Bau’s remembrance. The ripe red berries are delicious and healthful and restore all lost hit points. The ripening yellow berries are bitter and die the eater’s lips and tongue permanently yellow (-2 CHA). The unripe green berries are deadly (save versus poison or die).

7 – A reptilian man, with a face half bright yellow and half bright red, and a body that is royal blue dotted with vivid green. He is trapped within the glacial ice in the Southern wall and his blank dead eyes stare out in mute appeal. The tip of his spear, clutched in one hand, peeps out from the ice. It cannot be removed by force except by somebody with STR of 16+; doing so results in 2 hp damage from scratches by the blade. This spear is blessed to protect the wielder against parrot-men; if carrying it, the wielder always surprises parrot-men and is never surprised by them.