Thoughts return to the setting in which day and night both last a century.

In the last post on the topic, I described the following:

The City Standing Like a Candle in the Night - a walled fortress inhabited by a great and advanced civilizations able to magically last the night. The PCs would begin there, at the very bottom rung of the social order, early in the night - just a year or two in. Surrounding them would be all kinds of opportunities for adventure. Intrigue in the City itself. Raiding nearby "digger-type" settlements with huge underground caches of valuables (perhaps one of which is abandoned and forms, essentially, a megadungeon, with many of the defences still intact). Stealing from dwarf or gnome toll-takers at a nearby migratory choke-point. Searching for caches left by migratory peoples. Tangling with orcs and other night creatures. Searching for hermits or elder beings who do not move with the regular cycles? Trying to track an infamous Laputa-like floating castle?


As a setting, I think rather than being early in the night I would place the City at the precise point at which dusk segues into night. This is a world in which the sky is dark grey clouds laced with the orange-gold of a permanent sunset. It is cold but not glacial. Snow lies in patches but when the weather comes it is mostly sleet or hail. The forests and mountains are quiet: the animal life is preparing for hibernation or migrating to follow the sun. The last stragglers of the nomadic tribes pass to the West. The creatures of the night begin to appear. The things which have spent the last century underground begin to stir... 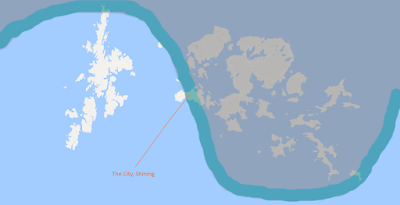 In the vicinity for PCs to explore/interact with are:


Above all I like the idea of the night being an actual physical presence, almost, which is older than the day. The night was there before there was light - and there are things in it which are the oldest things in the world. It's not that the night is the absence of day; rather, it's the night which moves.
Posted by noisms at 05:19

Email ThisBlogThis!Share to TwitterShare to FacebookShare to Pinterest
Labels: the city shining