There is literature (interpreted broadly to mean "something which is enjoyable to read on its own merits"). There are setting books. There is a small area of overlap between the two. If this was a Venn diagram, there would two circles with the diameter of Jupiter next to each other, with a few molecules of gas flirting with each other at the edge: 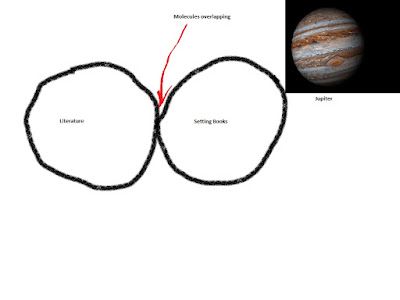 This sub-genre can be split into two further subgenres: setting books which are enjoyable to read on their own merits because they are highly imaginative, and things which have characters and a plot but where the setting itself is the main point of interest. I can think of a handful of examples of each.

Setting Books Which Are Enjoyable to Read on Their Own Merits

The original Planescape boxed set: the setting is so interesting that you can quite happily read it cover-to-cover.

Maze of the Blue Medusa. Whether you would call it a "setting book" per se I'm not sure, but interpreting that phrase a little loosely it definitely qualifies - I read it as literature first and gaming material second.

The Glory of the Empire: A Novel, A History. A slightly pretentious French setting book which records 1,000 years of history of an imaginary empire which rivaled Rome.

Changing Planes. Ursula K. Le Guin does Borges, basically - a whole book of vignettes about strange societies and the peoples who inhabit them (and worth tracking down if you can find it).

Gulliver's Travels would go in this category. Nobody really reads it because they care what happens to Gulliver, do they?

Dinotopia. Dinotopia does have a plot, I think, but I can't remember any of it. The point is the dinosaurs and the very thematically consistent, beautiful artistic depictions of them and how humans interact with them.

The Years of Rice and Salt. I have read a lot of Kim Stanley Robinson novels and quite a few of them flirt with being primarily setting books but with a plot and characters to keep you interested for 800 pages. (The Mars trilogy has this feeling at times.) This one, though, tips over the edge into being an alternative history rather than a novel.

Invisible Cities. Italo Calvino's masterwork sort of has a story threading it all together, but the point of it is really the descriptions of the different cities/city.
Posted by noisms at 05:44