Dreams Beneath the Ice

Floating on the wide ocean in its long-ago youth, the crocodile drifted in search of new places, new horizons, new sources of food. It was growing and felt the insatiable need to grow further. It was frightened of nothing. As it swam South it came across an archipelago of small islands, populated by the savage reptilian ancestors of penguins and whales, where, exhausted from its voyage, it slumbered. It slept for centuries - perhaps milennia - in a burrow it dug into the hot soil, recovering its strength.

But as it slept the world, as its capricious nature, grew cold. It was at the zenith of its heat, at the very point of entering one of its periodic flirtations with the frozen. Ice began spread across the ocean surfaces. Creeping like fingers. It reached the crocodile's archipelago, and grew over it like a moss. As the crocodile slept, the world outside became encased in ice. The beast's heart gradually slowed until it pumped just once or twice an hour; its breath faded to nothing. It felt little of this. It dreamed, though. It dreamed of ice and wind and cold grey seas, and the creatures it had seen in the Southern oceans and its life so far - rendered strange by the warping power of sleep. It dreamed of its burrow on its small island home, and that became the world: a world beneath the frozen pressure of an ice sheet which the crocodile never saw but somehow felt.

Six hundred thousand years later, when that world had thawed, it awoke.

Burrowing Spite: The Dreams of an Ancestral Whale Worm

Finned and flippered, half-mammalian, and almost the size of the crocodile itself - there were rivals swimming in those ancient seas. The crocodile fought them, despised them, and knew that they despised him. He dreamed of them too, in his hibernation beneath the surface of the earth. He dreamed of them burrowing through the ice towards him like toothed, muscular worms; burrowing ever downwards; burrowing through glacial barriers into the frozen earth above its head. They appear in its memory that way: not sea beasts but grey and perpetual diggers and tunnelers snaking through hard surfaces in constant and perpetual drilling search for those which they hate. Smaller than they were in the real world: somewhat longer than a man is tall. But also nastier than they were, too. Burrowing spite, squirming through the ice and rock.

HD 4+1, AC 16, AB +5, No. Appearing: 1d6
*Can bite for 2d6 damage; on a failed save vs. death a limb of the target is also torn off (roll 1d4 to determine)
*Can burrow through solid rock at half normal movement rate
*Can see in the dark
*Is immune to cold-based attacks 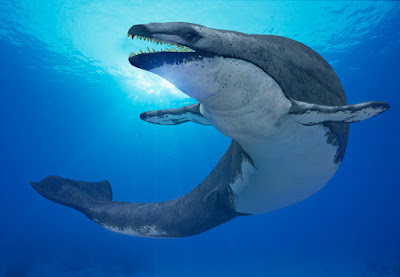 Picture this. Tunneling through ice and rock towards you.
Posted by noisms at 02:26