I had a dream last night. A friend and I were in quite a nice trendy bar on the veranda on a balmy summer night. With us were Ben Kingsley and John Malkovich. My friend and I were putting on a pantomime, and were trying to convince John Malkovich to star in it as Widow Twankey. (These terms may mean nothing if you're not British. Sorry.) Ben Kingsley was recommending it to him as a great career move - and actually dream world Ben Kingsley was a really nice chap all round. But John was a bit reticent and I woke up with the issue not having quite been resolved. 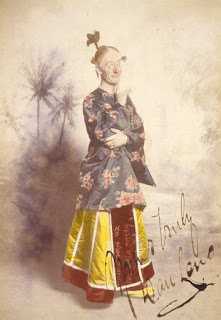 It reminded me of a conversation we had on an early episode of A Gaming Podcast About Nothing in which, if I recall correctly, we were musing about the possibility of what Seinfeld would have been like if Will Smith had taken the role of Jerry. At the time I thought that there was some sort of strange and distant mileage in making that prospect a story game. So here is the preliminary notes on that story game. It's called John Malkovich as Widow Twankey (or J-MAWT). It is incomplete and half-formed - maybe somebody can do something with it.

Pick a television series or film you enjoy, or roll on the following table:

Each player then picks a character who they want to be, given the initial starting premise for whatever the film or TV series is. ("I want to be Captain Picard"; "I want to be Riker", "I want to be Wesley Crusher" (as if!) etc.).

The game is taking place in Star Trek, tNG. Boris has expressed the desire to be Riker.

Jenny is sitting to the right of Boris. She has to force him to be somebody else instead. She rolls on the table and gets a 4 - Star Wars (the prequels). She thinks for the briefest of moments before saying: "Boris, you are not Riker as played by Jonathan 'Two Takes' Frakes. You are in fact Jar Jar Binks playing the First Officer on the USS Enterprise."

Jenny has expressed the desire to be Captain Picard. Alf, who is sitting to her right, rolls on the table and gets Aliens. He says, "Jenny, you are not Captain Picard as played by Patrick Stewart. You are in fact Sergeant Vasquez playing the Captain of the USS Enterprise."

And so on. The aim of the game is to play things out with the new characters in the roles allotted to them. So Captain Picard isn't the Captain Picard we know. The Captain of the Enterprise is instead a rather aggressive but competent Hispanic woman called Captain Vasquez. Riker isn't Riker. He is instead Commander Binks, Vasquez's "Number One". Maybe Welsey Crusher is rather like the Patrick Swayze character in 'Ghost'. And Deanna Troi is, of course, Mr T, the ship's counselor with the old fashioned "tough love" approach.

The cast do exactly the kind of things that would be done in a Star Trek: tNG episode. In fact, the GM should pick a Star Trek: tNG episode as the basic template. But instead of Riker, Picard and Wesley going on that away trip, it's Commander Binks, Captain Vasquez, and Patrick Swayze from Ghost. But Counselor T senses trouble.... And Dr William Wallace is sharpening his claymore just in case.
Posted by noisms at 00:48