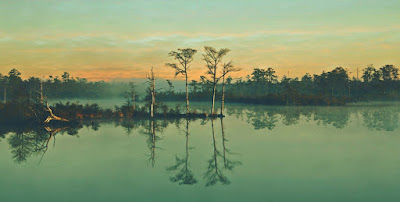 The surface of the Guarded Lake is a mirror reflecting blue and white and the looming trees around its edges. Children play in its clear waters. Villagers wade in its shallows collecting freshwater whelks and oysters. Canoes skid over its surface steered by men carrying nets. They know that they are safe from what lies beneath.

Nobody knows how old the crocodile is, but it is old. It has lived in this lake for long eons. Its armour is thick and as hard as acacia wood. Its long, lazy tail is bigger than the oldest and largest python. Its body is broader than the great war canoes of the Wogamusin. Each of its teeth is bigger than the beak of a cassowary. Its eyes are intelligent and cold. They have seen beyond time.

The people of Sos Kundi know that the lake holds no dangers. Their shamanesses have since the dawn of their people’s memory known that the crocodile mainly sleeps, and dreams, and reminisces. It does not hunger except for what it has lost. It feels the creeping onset of old age and remembers its youth. It is used to the Sos Kundi and they are for it as significant and useful a part of the environment as the singing birds in the forest.

Behind the crocodile’s gently smiling jaws is a world of memory. In its mind are memories of such antiquity that all trace of them have faded elsewhere in the world. Beasts long extinct whose bones are now dust. Spirits whose substance have gradually tattered and frayed down the eons until nothing remains. Civilizations which have risen and fallen and whose ruins are no longer even part of distant legend. Lands which have sunk beneath seas so deep that not even the kraken have seen them. The crocodile witnessed it all and those memories live inside it still.


Memory. The crocodile’s mind is a store of it so vast that its extent is beyond contemplation. If one could get inside such a mind one could discover secrets and wonders from beyond time itself - if one could survive the things which live within the memories of the oldest of the old.
Posted by noisms at 04:57