More thoughts on the day-and-night-last-100-years-world (I need to think of a name for it). 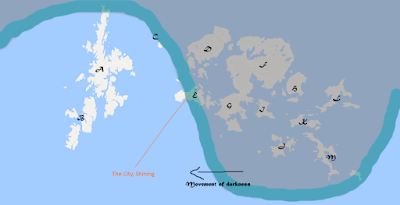 A and B - These continents have been in the daylight for a very long time - 70 years or so, at a rough estimate. Plant growth has been vast, succored by the constant sun - much of the lower half of A and the upper half of B is thick jungle of hugely tall trees. This becomes temperate forest in the central part of A, then boreal forest, then at the tip where it has been evening for a number of decades there is icy tundra.

C - The daytime is very old here, so it is the lushest place of all. Nigh on a century of daylight has results in a verdant haven green. But on the eastern coast evening is already drawing in. It is mild, but - to coin a phrase - winter is coming.

D-M - These continent has been in the darkness for some years and all the plant life is dead. Fungus and lichen are the only growing things. The only exceptions are the far south-eastern corner of the south-eastern sub-continent of M, and the still-daylight western portion of the continent of E. That area throngs with animal life which has fled the night and has not yet hibernated. The central band of the continent of E is swathed in the evening: it is cool, dark, but not dead.

A-B - I picture human civilizations on the continents of A and B to be "ocean traversers". On the western half of these continents people would wait until evening was upon them and then migrate west over the ocean to L and M, where it would be daytime. Then when evening arrived there, they would skip back east across the ocean (at night) to arrive back at A and B again for the next day. A similar process would go on from the eastern side. When night arrived these civilizations would sail across the ocean to C, D and E for the daytime, and then when evening arrive there, they would skip back west over to A and B.

Since this is a regular process what has probably happened is that these ocean-going nomadic civilizations have built cities on both hemispheres - in A and B, L and M, and C, D and E. They live in these cities during the day, and then when night is upon them they take everything with them that isn't bolted down and go over to their other cities on the other side of the world, keeping their fingers crossed that nobody is going to destroy things while they're gone. (When they arrive on the other side of the ocean in their alternative homes, they are unsure of what they'll discover has happened there during the course of the night.)

So currently, their cities in A and B are full and prospering.

F, G, E, - Nomadic tribes dominate here. They are currently all gathered together bunched up at the western corner of E, preparing for night. Some tribes are settling down into ancient tunnel networks used since time immemorial, where they will shelter for the entire night and emerge blinking into the sun in 100 years' time. From there they will journey back across to F. (At choke points on the isthmuses between E and G there will be dwarf or gnome cities who charge certain tolls to pass.)
Other tribes use an alternative tactic - they are waiting in the daylight but when night falls they will as quickly as possible travel back across the night in order to get to F just as morning is dawning. They will then have it all to themselves before the "wait it out" tribes arrive, but the disadvantage is that travelling through the night exposes you to its terrors.

D - M - Around the coasts of all of these continents are sea-based nomads but of a different nature than those who flit across the oceans from A and B. The ones here are huge floating cities (a bit like in Mieville's The Scar) - during the day, or for periods of it, they may stay put or moor somewhere along a coast, but, equally, they may move. During the night, as it is now, they remain on the ocean, operating on the basis that it is safest to stay away from land and to keep in motion. (Maybe some of them actually steal into the abandoned cities in L and M of the people who live in A and B when they're not there.)

All of this is just the basic framework of how 'normal' mundane humanity operates. There is of course much more to it than that. Inland from the coasts is where things get interesting: cities which are inhabited above ground in the day and below ground at night; demi-human polities which are largely unaffected by lack of light (dwarves, maybe sverfneblin who merrily survive off fungus); subterranean orc strongholds which slumber through the day and come alive at night; wizard towers; magical moving castles; undead empires, etc., etc. There is clearly also a large role for myconids in this world - there could be entire kingdoms of the things living below ground but colonising the surface at night. And that's not to mention the Stuff of the Night itself - the elder gods who were there before the light came and who are forced to wander with the night for eternity.

Email ThisBlogThis!Share to TwitterShare to FacebookShare to Pinterest
Labels: the city shining